Another One Heads for California

In the litany of relatives that Maud Woodworth Bean endured losing during the late 1920s, thankfully there were a few still remaining for family support. Among the siblings listed in Maud’s father’s obituary was William’s brother, Harvey.

Inadvertently (I’m sure) listed by the newspaper as “H. D. Woodworth,” the man was actually named Harvey Payne Woodworth—the use of initials evidently being the fashion of the day, and the letter “D” appearing not much different than the letter “P.”

We see him listed as “Harvey P.” in the 1880 census, where as a young man of nineteen, he is still residing in his parents’ household in Pleasant Prairie in Kenosha County, Wisconsin.

Only a few years later—on January 10, 1883—we see a Kenosha County record that Harvey P. Woodworth has taken to himself a bride.

By the time of the 1900 census, we realize that the former Eva V. Williams has given Harvey a son, whom they named Milton. That same census also reveals a glimpse into one particular sadness this family has already endured: Eva is listed as mother of two children, of whom only one is still surviving.

We also learn there that Milton’s bride was actually eight years older than he was. If the data on the 1900 census can be trusted—after all, sometimes respondents don’t answer correctly, or the census taker transcribes in error—Eva turned thirty years of age just three months after the wedding. In that era, a pregnancy after the age of thirty could be considered more of a risk than it is currently.

Milton most likely was not the first baby for Harvey and Eva, seeing his arrival on January 11, 1886, was three years after their wedding. Perhaps the lost child was the first one—if not, a birth after Milton's arrival might have meant difficulty both for the child and a mother nearing thirty five years of age.

One brief gift from an online resource for Milton’s birth information was the listing of complete names. It turns out the mother was actually listed as Eva Victoria, and the son—perhaps even more elaborately—was christened Milton Francis PayneWoodworth.

Life for the small Woodworth family seemed to continue without much variance through the years. Though I could not locate their record for the 1910 census until—thankfully!—someone entered a correction on the Ancestry.com index of their record as “Worth Harvey Wood,” their 1920 census showed them still living in Kenosha County, Wisconsin.

After that, though, things changed. Whether Harvey had decided to head west to be with his ailing brother William in his last months, or whether Harvey’s family coincidentally decided to make the move more permanent, by the year 1928, they were listed in the city directory for Pomona, California—not far from William’s ranch in Covina.

Unlike most of those “young men” going west, by that time, Harvey was sixty seven. I’ll let you do the math yourself for his wife; after all, it isn’t proper to publicly reveal a lady’s age.

Pomona must not have been a permanent housing situation for the H. P. Woodworth family. The 1930 census records them living in the same county—the soon-to-become-enormous Los Angeles County—but they now resided in the town of Glendora. A number of city directories for various towns in the region carry their information throughout the decade of the 1930s—until one change about 1938. From that point, confirmed further in the 1940 census, Harvey is not listed with his lifelong companion, Eva, but with a wife called Fannie. Evidently, that eight year lead caught up with them. Though I have yet to find any confirmation of Eva’s passing—which means…groan…back to the unindexed California Death Index at FamilySearch.org—I presume at this late date in the process, surely it wouldn’t have been divorce which yielded such a name change.

But…only with appropriate documentation can I say that for sure. 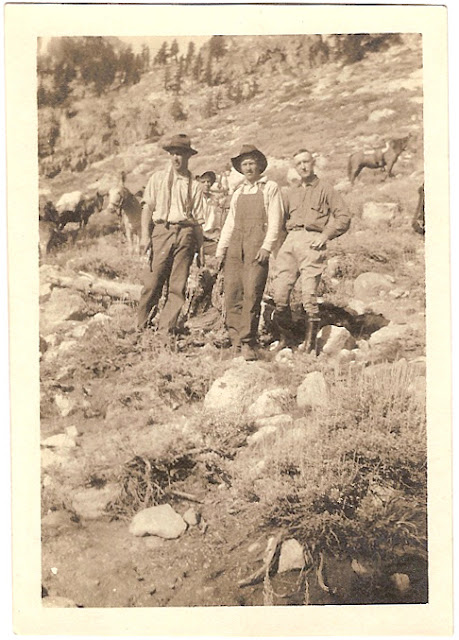 Photograph above: Brothers? Friends? Coworkers? Three men in work clothes stand on a hillside while their horses take a break. If you look closely, you can see a fourth man seated behind the other three. From the collection of Bill Bean, none of the men are labeled in this undated picture.
© Copyright 2011 – 2022 by Jacqi Stevens at 2:41:00 AM
Email ThisBlogThis!Share to TwitterShare to FacebookShare to Pinterest
Labels: California, Documentation, Newspaper Clippings, On the Move, Woodworth