Using archived newspaper collections to uncover family history details can sometimes lead to unexpected revelations. As I’ve moved from the big picture events—graduation from school, for instance—to those little snippets buried deep within local papers’ middle sections, the process has gone more slowly, but the pay-off may be greater.

In the case of Samuel Bean and his bride, for instance, while Sam’s Oakland Tribune had no longer carried on its breathless coverage of the blind and deaf marvel, Maud’s hometown paper took up the narrative with a wisp of trivia here, a trite blurb there.

Even so, I was surprised to come across two entries in the Covina Argus that reinforced the observation that there is so much more to the story of Sam and Maud during those silent years of the 1920s and 1930s.

Several years after their first son, Sammie junior, was born, I ran across an item dated March 5, 1926:

Mrs. Samuel Bean has arrived from Texas, where she has spent several months, and will spend the summer with her parents, Mr. and Mrs. W. C. Woodworth.

There was clearly something I had missed in this saga.

I can imagine Sam and Maud traveling back to Boston—as we had discovered upon locating Sam’s father’s obituary in a 1928 San Jose newspaper—since there were a number of nationally-recognized schools working with the blind and deaf in and near Massachusetts.

But Texas? What would have brought the Bean family to Texas?

While I am clueless how to track their whereabouts in a state the size of Texas, I can make an educated guess about why Maud, alone, might have returned to her parents’ home.

No, it wasn’t another unfortunate turn of events. Don’t despair over this now-five-year-old marriage.

I am guessing the return trip was owing to the fact that Sammie junior’s younger brother was about to make his appearance. I’ve already known from family records that baby Earle was born in July of that year. Perhaps his dad was still on a traveling sales and speaking circuit, and the pace was getting to Maud during this pregnancy. After all, I sense that Maud was possessed of a delicate constitution.

While patting myself on the back for my astute observation as to her condition, however, another blip in the Covina Argus pulled me up short and told me I didn’t, after all, know everything there was to know about this woman.

Twin sons were born Friday, July 16, to Mr. and Mrs. Samuel W. Bean of Alameda at the Covina hospital. Mrs. Bean is a daughter of Mr. and Mrs. W. C. Woodworth. 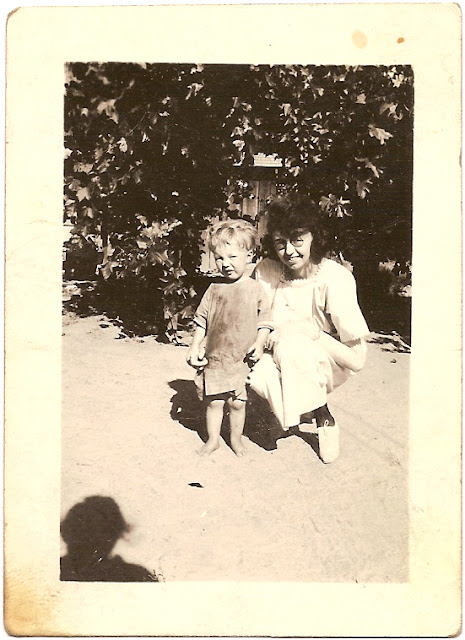 Photograph: Yet another unidentified subject from among the unlabeled pictures in Bill Bean's collection. A very faint stamp on the reverse indicates, "Hammond's Studio, Porterville, CA." Like the unnamed woman in this photo, Maud Woodworth Bean had dark hair and very thick glasses. Similar to this woman, Maud--and her sons and grandson--had eyes that slanted downward at the outside edges. While this subject's clothing seems to indicate a much more recent time period than Maud's lifetime (she died in 1933), and while Maud and Sam had no connections in Porterville that I am aware of (yet), the similarities are so tempting.
© Copyright 2011 – 2022 by Jacqi Stevens at 2:46:00 AM
Email ThisBlogThis!Share to TwitterShare to FacebookShare to Pinterest
Labels: Bean, California, Newspaper Clippings, Occupations, On the Move