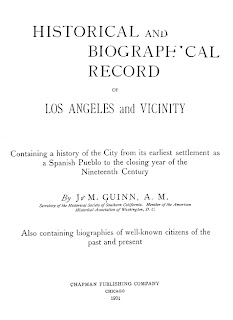 I’m thankful for the time, just over one hundred years ago, when it seemed to be a popular endeavor for publishers to edit collections of local biographical sketches, assembled under the theme of a city or regional history. When I researched my mother-in-law’s line in Perry County, Ohio, I found such a volume indispensible. Likewise, as I’ve studied family lines in both cities the size of Chicago and of lesser population such as Fort Wayne, I’ve learned to look for such history books from that era.

In the case of the Woodworth family, moving from Wisconsin to California during that time period, it turns out that I’ve hit the jackpot with not one but two biographical sketches—the one of the earlier years in Bristol, Wisconsin, and the later edition from this family’s establishment in the greater Los Angeles area.

In the face of that serendipity, though, I’ve not been able to locate that final biographical sketch that gets written on behalf of all those who have gone before—the obituary—so an entry in Find A Grave leaves a solitary note of finality to the life of Lafayette D. Woodworth.

Let’s start with the most recent biographical entry we can find—this one located thanks to the perseverance of reader Intense Guy and the preservation efforts of the Library of Congress.

The source for this study is a thick volume written by J. M. Guinn. At the time the book was published—in 1901, only three years before L. D. Woodworth’s passing—the author was concurrently serving on the board of the Historical Society of Southern California. Lafayette Woodworth’s entry was tucked away on page 735 of Historical and Biographical Record of Los Angeles and Vicinity: Containing a history of the City from its earliest settlement as a Spanish Pueblo to the closing year of the Nineteenth Century. (With a title that long, is it any surprise the book that bore this name was that lengthy?!)

The value of this entry—of course, provided the reporting is proven to be correct in all its detail—is that it yields yet another generation of names, plus a sense of where L. D. Woodworth’s family originated. While the narrative continues past that point with no further remarkable observations in the first paragraph—like every other farm boy, evidently Lafayette divided his time between book work and hands-on practical application—what we’ll see in the next couple days will help piece together more of this family’s story.

LAFAYETTE D. WOODWORTH is one of the old settlers and successful horticulturists of lower Azusa, in the San Gabriel valley, and owns in his home ranch sixteen and one-half acres, mostly under orange culture. He was born in Chittenden county, Vt., May 13, 1824, being a son of Jabez and Mehitable (Shaw) Woodworth, both natives of New England, the former of Scotch extraction, and the latter of English lineage. When a small boy Lafayette Woodworth accompanied his parents from Chittenden county to Franklin county, Vt., where he passed his childhood days in a manner similar to other farmer boys, learning every department of farm work and going to the district schools during the winter time.

© Copyright 2011 – 2022 by Jacqi Stevens at 2:49:00 AM
Email ThisBlogThis!Share to TwitterShare to FacebookShare to Pinterest
Labels: Books, California, On the Move, Wisconsin, Woodworth