The Cord of Life

In the grand opening of the season, a summer cottage near the ocean’s edge seems hardly the right setting for a tragedy-in-progress, and yet, on June 26, 1927, that is exactly what happened. 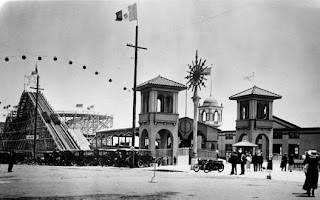 Lafayette D. Woodworth—in case you’ve lost track by this point, that would be Maud Woodworth Bean’s uncle—had recently been able to take a break from the demands of the life of a farmer in the midst of the growing season. He, his wife Olive, and their family had been invited to enjoy the refreshing ocean breezes at Seal Beach—and, no doubt, the associated seaside activities—as the weekend guests of fellow Covina residents, Mr. and Mrs. John Wolf.

The Wolf cottage was located about thirty five miles from the Woodworth farm, and offered proximity to such favored attractions of the time as the Seal Beach Amusement Park, as well as more traditional shoreline pastimes.

In the midst of the lulling repetition of crashing waves, accentuated by the laughter of children playing nearby, came a different sound. Perhaps it was a scream, or a shout. Maybe it was followed by the dull thud of feet pounding on the sand in a vain attempt at running to provide aid. Maybe later, a siren added its call.

Or maybe it was just the faint swishing sound of a body passing abruptly from an upright, standing position, to a crumpled mass on the ground.

The Covina Argus mentioned, in retrospect, that young Harvey Woodworth had been “frail from childhood.” Replaying the scene in its July 1, 1927, front page report, the Argus noted that

the young man was suddenly stricken with his heart while enjoying the beach. Mrs. Woodworth caught her son as he fell, but the cord of life had snapped, death coming immediately.

The Argus continued the article with the usual information one would expect in obituaries: who remained in the family, where the funeral and burial were to take place. Of course, thanks once again to journalism’s difficulty with exacting detail, the paper left out any mention of that mystery sister whose name is causing me particular struggles. But that is not what I’m concerned with at this point.

What I do question is the cause for twenty three year old Harvey’s untimely passing. Don’t let yourself write it off as an unfortunate case of early-season heat exhaustion or dehydration. It was that phrase, “suddenly stricken with his heart” that grabs my attention and causes me to wonder….

Photograph above: a 1920 view of the Seal Beach Amusement Park, on the Orange County, California, coastline; courtesy Wikipedia; in the public domain.
© Copyright 2011 – 2022 by Jacqi Stevens at 2:52:00 AM
Email ThisBlogThis!Share to TwitterShare to FacebookShare to Pinterest
Labels: California, Woodworth