One detail that caught my eye, as I read the obituary for Maud Woodworth Bean’s father, was a strangely familiar story line—one that replicated her husband Sam’s own history of blindness.

Remember, Samuel W. Bean was one of a set of perfectly healthy, rambunctious twin boys born in 1896 to Redwood City, California, residents Leon and Ella Shields Bean. Somewhere between his thirteenth and sixteenth year—depending on whether you believe the “rock fight” or “baseball game” version of the story—Sam sustained an injury to his eye, which eventually also affected his hearing. Unable to see or hear from that point onward, he soon enrolled in the California School for the Deaf and Blind in Berkeley, where he met his future wife, Maud Woodworth.

Apparently, this scenario repeated one that Maud was already quite accustomed to: the story of her own father, William C. Woodworth. Take a look at this excerpt from the front page of the Covina Argus on May 25, 1928, where William Woodworth’s obituary was published, and see if this report sounds familiar to you:

At the age of twelve the sight of Mr. Woodworth’s right eye was destroyed by a blow from a snowball thrown by a schoolmate, and when thirty-eight years of age he lost the vision of his left eye. Although living in total darkness for nearly twenty-five years, he looked after the affairs of his large ranch and retained his sunny, cheerful disposition which made for him a host of friends. 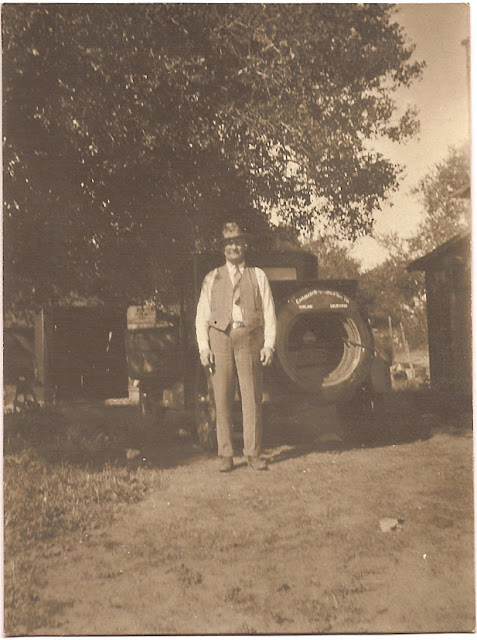 Photograph above: An unidentified man stands in a dirt driveway near an old truck in this unmarked, undated picture from the collection of Bill Bean. While this most likely is not William Woodworth, it could possibly be someone from that same time period and region.
© Copyright 2011 – 2022 by Jacqi Stevens at 2:51:00 AM
Email ThisBlogThis!Share to TwitterShare to FacebookShare to Pinterest
Labels: Bean, California, Medical Issues, Newspaper Clippings, Unidentified Faces, Woodworth