Without the continuation of the multiple newspaper reports featuring Samuel Bean’s young adult life, we’ll have to rely on other methods to piece together the story of Sam’s twenties and thirties. The newspapers, however, haven't left us totally bereft of information. Like the breadcrumbs sprinkled on the trail in the children's fairy tale, Hansel and Gretel, the newspapers have left us some sparse hints. 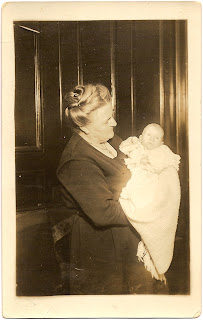 Following the marriage of Sam Bean and Maud Woodworth, the next logical step—at least during that era—was the arrival of any children. While Sam’s twin brother, Bill, was still a long way from his own marriage date, and while their older sister Leona evidently had no children at this point either, it looks like Sam was about to win the race to provide their mother with the first grandbaby.

Like clockwork, Sammie junior dutifully arrived on September 26, 1921, at the Alameda, California, household. Perhaps his imminent arrival had been the impetus for Sam and Maud, earlier in the year, to seek permission to sell Sam’s books door-to-door. With the family size soon to expand from two to three, financial pressures were sure to increase proportionately. On the other hand, realizing that the news article about Sam’s petition to the city councils was published in mid July, that meant it was a very pregnant Maud who would be accompanying her husband on his business rounds—an uncomfortable thought, indeed, in the summertime heat.

Fortunately, to balance this pressure, Sam and Maud were evidently living with Sam’s mother, Ella. It appears that the property Ella owned was either divided up as a duplex, or possibly housed even more rental units. That latitude with their housing costs, alone, would lessen the financial blow on the young couple if the book sales didn’t come through. And while all indications seemed to have gone silent about Sam’s dad, one would presume that the successful contractor would be willing to provide his son some temporary assistance if necessary.

There is no newspaper mention of Sammie junior’s arrival. No delightful scrapbook memories of his “first Christmas” or any of the usual rites of passage for first babies. The next reference to the family comes not from any northern California newspapers, but from a column in Maud’s hometown newspaper, the Covina Argus. Dated nearly six months after the proud parents’ firstborn had arrived, it simply mentioned that “Mr. and Mrs. Samuel Bean of Alameda” were in town, visiting Maud’s parents “for some time.” The March 3, 1922, “News of the Valley” column also explained that, after their extended visit, the couple would then head to Los Angeles to visit other relatives.

One would presume that, along with “Mr. and Mrs. Samuel Bean,” a very young Sammie junior would also make his appearance. He might, after all, have been the very instigation for his mother's travels back home.
© Copyright 2011 – 2022 by Jacqi Stevens at 2:40:00 AM
Email ThisBlogThis!Share to TwitterShare to FacebookShare to Pinterest
Labels: Bean, California, Newspaper Clippings, Woodworth