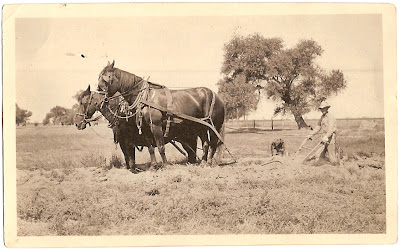 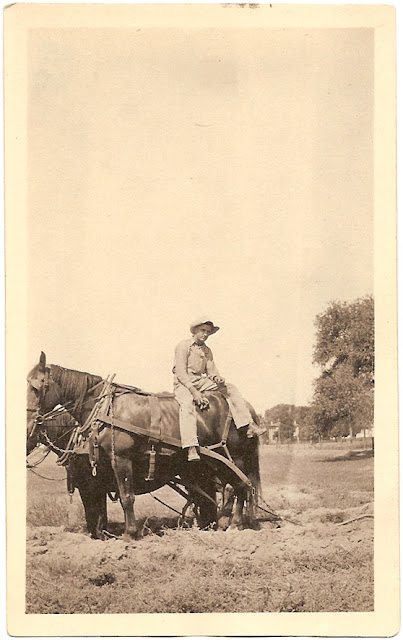 A man—obviously at home with his land and his horses—works the field in possibly the same way that Maud Woodworth Bean’s father William might have done, once he settled in what was then a very rural section of Los Angeles County, California.

While you are contemplating how very different life must have been in that crazy region of southern California almost one hundred years ago, my family and I are hurtling southward, at a speed unattainable back in that age. We’re headed to a coastal town not far from there (well, in a cosmic sense) to visit a potential college choice for our daughter: University of California at Santa Barbara.

Said daughter—whom I’ve taken to calling “She Whose Name Must Not Virtually Be Mentioned” in my infrequent online trespasses—has plans to double major in anthropology and archaeology, and to pursue higher education internationally to focus on her intended specialization in Ireland.

The toss-up, right now, is between UC Santa Barbara and my own alma mater, University of the Pacific, which institution we visited last weekend. A third acceptance has yet to be received, or we’d be adding another destination to our college-touring itinerary.

In the meantime, as we spend time surrounded by landscapes not much different than those pictured here, I fervently wish the indecision were already over and we had some definite answers.

Answers to questions like “who is this guy?” wouldn’t hurt, either.
© Copyright 2011 – 2022 by Jacqi Stevens at 2:41:00 AM
Email ThisBlogThis!Share to TwitterShare to FacebookShare to Pinterest
Labels: A Process Break, Bean, Unidentified Faces