Could Always Use Some More Help 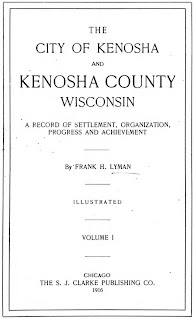 When I mentioned yesterday the odd discovery of a fourteen year old girl buried two thousand miles away from her parents' home, I couldn’t help but wonder what the story behind that puzzle might be.

Evidently, I wasn’t the only one wondering. Thankfully, reader Intense Guy (“Iggy”) applied his search talent in finding more clues. Thanks, also, to Google™ Books, an old county history book is revived and brought to new research life in time to provide part of the answer.

The parents of that fourteen year old girl, Gilbert and Emma Woodworth Larabee, were lifetime residents of Kenosha County in Wisconsin. Remaining in Pleasant Prairie when her parents and brothers left town—first for Iowa, then for California in 1886—Emma was married to a man who was married to his land. Gilbert Larabee, like his pioneer father before him, was a farmer. Inheriting the responsibility for his father’s family farm, Gilbert was not likely to consider joining the emigrating Woodworth family, no matter how cold the Wisconsin winters might become in comparison to the beckoning sunshine of California’s golden opportunities.

And yet, evidently, the Larabees’ oldest daughter found her way from Wisconsin to California—and at a young age in an era in which it was unlikely that she would have traveled alone.

A biographical sketch in the 1916 edition The City of Kenosha and Kenosha County, Wisconsin; a Record of Settlement,Organization, Progress and Achievement provides a clue. Evidently, Gilbert and his family did move to California.

Gilbert E. Larabee, the youngest of the family, pursued his education in the common schools of Pleasant Prairie until he reached the age of eighteen years, after which his entire attention was concentrated upon the work of the home farm until the death of his father. He then began farming on his own account and for six years cultivated a tract of rented land of twenty-five acres. At the end of that period he purchased twenty-five acres but later sold his property and removed to California, where he spent one year.

The trick is, of course, to figure out which year it was that Gilbert and his family made the move westward. Using the timeline in the biographical sketch, unfortunately, doesn’t add up to any logical explanation for how Hattie died in California.

The timeline starts with the death of Gilbert’s father. The book provides further details:

He [Gilbert] was born in Pleasant Prairie, April 7, 1858, a son of Eleazer and Elizabeth (Morehouse) Larabee, who were natives of the state of New York and were among the first settlers to arrive in Kenosha county, establishing their home in Pleasant Prairie township, where for several years the father engaged in the manufacture of brick. He [the father] afterward purchased forty acres of land, upon which he resided to the time of his death, which occurred on the 4th of May, 1890.

If Gilbert’s father died in 1890, and then Gilbert “began farming on his own account” on rented land for six years, plus an undisclosed additional time period devoted to working the land he subsequently purchased for himself, it would be well past 1896 when he “removed to California.”

While it helps to have the explanation that the family did, after all, try life in sunny California, it doesn’t explain the circumstances behind their daughter’s death there in that earlier year.

We still have to stand on some presumptions. Either Gilbert made the move after his father died, but before purchasing his own tract of land, and the book’s report contains errors—which can be quite possible—or he and his family traveled west for a visit well before the time in which they attempted moving to the state. That, of course, would put the family in the position of trying to move to California—the very place that would remind them of the loss of their daughter—well after that loss had occurred.

Then again, there is always the possibility that the Hattie Larabee buried in Oakdale Memorial Park in Los Angeles County isn’t our Hattie…except for one detail: the inscription on her headstone:

© Copyright 2011 – 2022 by Jacqi Stevens at 2:43:00 AM
Email ThisBlogThis!Share to TwitterShare to FacebookShare to Pinterest
Labels: California, Cemeteries, On the Move, Online Resources, Woodworth