In all these latest newspaper clues about the Samuel W. Bean family of Alameda, California, there is something missing that troubles me.

When the Argus provided the surprising announcement that Maud was returning from Texas to spend an extended visit at her parents’ home—most likely during her pregnancy that resulted in the birth of her twin boys—it indicated Maud’s return as if she were traveling alone.

Where was her now-four-year-old son, Sammie?

I would normally have presumed that the answer to such a question would have been, “With his mother.”

In this case, though, I’m beginning to wonder. Perhaps it wasn’t a case of a newspaper refusing to make any acknowledgment of the very existence of children. Perhaps Sam and Maud were traveling the country—as some later newspaper articles explained—making public presentations and selling Sam’s books. With the challenge of arranging both business details and travel itinerary for a blind and deaf poet, perhaps Maud was not up for also being full time supermom.

While I don’t know this for sure, I am guessing that maybe that near-unnoticed silence on young Sammie’s behalf was owing to the fact that Sammie might not have been with his father and mother.

Maybe Sammie was still at “home” in Alameda, at 1807 Santa Clara Avenue, with the woman who still lived at that address: his grandma. 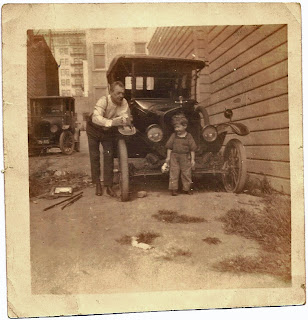 Was Ella Shields Bean serving as surrogate mother? I think back, now, to the pictures I have of a very young Sammie—hanging out with Uncle Bob Grant while he fixed cars. Perhaps Ella’s daughter, Leona Grant, popped in often to help with her mother’s new responsibility as grandmother.

Missing those regular newspaper reports that kept me up on Sam Bean and the details of his life, I forgot that maybe someone else also might have gotten swallowed up in that silence: a little boy whose parents were busy covering the miles to earn the “living” that ended up keeping them away from home.
© Copyright 2011 – 2022 by Jacqi Stevens at 2:44:00 AM
Email ThisBlogThis!Share to TwitterShare to FacebookShare to Pinterest
Labels: Bean, California, Cars, Grant, Newspaper Clippings, Occupations, On the Move, Shields, Woodworth