On Monday, January 13, 1913, an unassuming entry appeared in the San Jose Evening News:

A suit for divorce has been filed by Ella Bean against Leon S. Bean. The charges are cruelty. S. W. Williard is the attorney for Mrs. Bean.

One hundred years ago, that type of news report was certainly less common than it is today. In the case of Leon and Ella Bean, it would mean a family upheaval for their twin boys, who were still sixteen years of age—and possibly for their older sister, Leona, as well, though she had by then attained the age of majority and would shortly be a married woman, herself.

By this time, the Bean family had made the move from Redwood City—home for Leon’s family for two generations, and for Ella’s parents during her own teenage years. With the contracting business that had engaged Leon so much in the Palo Alto area, the family had evidently moved over the county line from San Mateo County to Santa Clara County by the time of the 1910 census, and were now settled in the small but respectable town of Palo Alto.

San Jose, the county seat for Santa Clara County, would of course be the newspaper of record for local court proceedings, and their city paper’s demure announcement was to be expected in such matters.

What was a surprise was the report subsequently found in another city’s newspaper just one week later. While I have no idea what the size of nearby San Francisco might have been one hundred years ago, it surely represented one of the sizeable cities of our country even at that point. Yet, the tone of the reporting could be taken for the style of a small town gossip column in the detail it provided.

Picture the setting of a breakfast nook in a Victorian-style home in a fashionable Bay Area neighborhood as you read what the San Francisco Call saw fit to print on January 31, 1913: 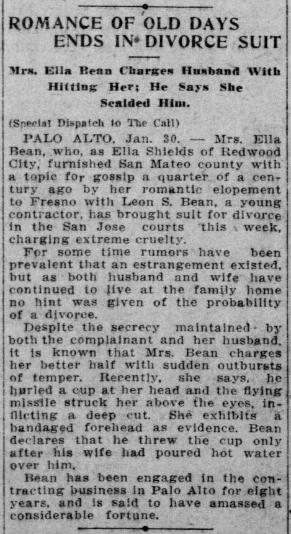 Mrs. Ella Bean Charges Husband With Hitting Her; He Says She Scalded Him.

(Special Dispatch to The Call)

PALO ALTO, Jan. 30.—Mrs. Ella Bean, who, as Ella Shields of Redwood City, furnished San Mateo county with a topic for gossip a quarter of a century ago by her romantic elopement to Fresno with Leon S. Bean, a young contractor, has brought suit for divorce in the San Jose courts this week, charging extreme cruelty.
For some time rumors have been prevalent that an estrangement existed, but as both husband and wife have continued to live at the family home no hint was given of the probability of a divorce.
Despite the secrecy maintained by both the complainant and her husband, it is known that Mrs. Bean charges her better half with sudden outbursts of temper. Recently, she says, he hurled a cup at her head and the flying missile struck her above the eyes, inflicting a deep cut. She exhibits a bandaged forehead as evidence. Bean declares that he threw the cup only after his wife had poured hot water over him.
Bean has been engaged in the contracting business in Palo Alto for eight years, and is said to have amassed a considerable fortune.

While I’m not entirely sure of the accuracy of all the details divulged in the newspaper’s breathless report, the story does open my mind up to some additional possibilities. For one thing, remember that Leon and Ella had twin boys. With a few glimpses here of the twins in their younger days, the couple fleeting reports of twin Samuel’s blind-and-deaf condition need to be revisited.

Sam wasn’t always that way. He wasn’t born blind and deaf. In fact, for most of his childhood, he and his brother carried on with the usual antics one would expect of lively twins. Family oral reports had one of two traditionally-recited causes for Sam’s handicap. One story was that he sustained injuries from a softball game, when a ball caught him in the eye, and a resulting infection spread to his ears.

The other story? That Sam was in a rock fight.

I don’t know which one was the correct rendering of the incident. But I do know that it was reported to have happened either when he was twelve, or when he was sixteen.

Either way, any injury that inflicts such a drastic impact on the life of a child is ripe to also become the cause of the unraveling of a marriage.

Now, seeing how snarky the report from a city newspaper like the San Francisco Call could have been, and wondering what the ripple effect might have been on the couple’s children, I see the perfect alignment of the age (sixteen) and the instigation (anger or embarrassment over one’s parents being the focus of a nasty journalistic smear, even in a small town like Palo Alto).