Bit by bit, we're working our way through the hundred-plus year old photograph collection of a woman named Thirza Browne Cole. Though I found the pictures in an antique store in Jackson, California, the origins seemed to be anything but from California. We've already observed the studio imprint on one baby picture was from Greeley, Colorado. That led to the accidental discovery that Thirza's childhood home was situated next to the household of an uncle of the young man in the second photograph.

With this last baby picture, we already had a few hints to work with in our search. First, the baby's full name was written on the back of the photograph. And second, there was a nearly-unreadable studio imprint that said—I think—"F. L. Ray" of Salida.

Salida, where? There were two possibilities: Salida in Colorado or Salida in California.

We can't be too fussy about this baby picture, though. At least it contains a full name: Louise Van Noate. So, opting for that first possibility—a baby in Salida, Colorado—off to the most recent census record I went to see how many people there were in 1940 who claimed that exact same name.

As it turned out, not many. No, actually...more than I could handle. It appears that the Ancestry.com search engine doesn't take kindly to two-part surnames. I got plenty of hits, alright, but they were for Louises with every surname imaginable starting with Van. I tried removing the space between the Van and the Noate, but that didn't help.

But don't expect it to be for a baby Louise Van Noate. Instead, Louise was married to a Van Noate. And she lived in Lodi, California.

In the 1940 census, this Louise was thirty four years of age, putting her year of birth around 1906, a believable date, considering the style and appearance of her baby picture. She was born in Colorado, thus telling us just where that town of Salida was where her photographer was located. We also learn from the census that she was married to Leon, owner of a retail drug store, and had a ten year old son named William.

The 1930 census basically agreed with all that information, minus the ten years' span in ages and a change in residence—the Van Noates had moved to Lodi from Vallejo in Solano County, California.

Pushing back another ten years to the 1920 census wouldn't help our quest, though, because by then, Louise would have been about fourteen years of age and obviously not married. So we had to snoop around for other ways to discover her identity. An entry in Ancestry's California Death Index and an obituary (thankfully) posted by a volunteer on her Find A Grave memorial gave us that one clue we were seeking: Louise Van Noate was born to William and Nellie Browne Yates. And Nellie was Thirza Cole's sister.

Thus, of all the photographs in Thirza Cole's collection, the only one I've found so far who was actually a relative to Thirza was this baby Louise. And Louise was born Eleanor Louise Yates, thus explaining why the census entry we found earlier for newlywed Nellie in Colorado hadn't rung any bells: her daughter was listed in the census as Eleanor, not Louise.

Those middle names can get you every time. 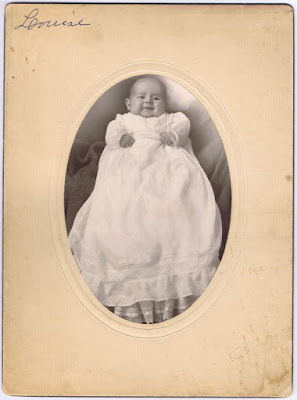 Above: Photograph, circa 1906, of baby Eleanor Louise Yates, daughter of William D. and Nellie Browne Yates of Salida, Colorado. Photograph currently in possession of author until claimed by a family member.
© Copyright 2011 – 2022 by Jacqi Stevens at 2:53:00 AM
Email ThisBlogThis!Share to TwitterShare to FacebookShare to Pinterest
Labels: Brown, Browne, California, Cole, Colorado, Family Photos, Yates