Our task for today: find out whether the "Baby" Pollock of the household next door to Thirza Brown's family was one and the same as the Ralph Pollock whose picture was included in Thirza's photo collection, years later.

I'm not sure why people would actually name their baby something as obvious as "Baby" but that, apparently, is what some people did in the old census records. In our case, however—trying to locate the true identity of one Baby Pollock in the 1880 census for Weld County, Colorado—the frustration of not knowing will impel us on a chase through a few census records to determine not only who Baby really was, but what became of his father, Harvey Pollock.

Not only had we already discovered this Baby Pollock next door to the Browns in 1880, but we had located a Ralph Pollock in the 1900 census. Only problem: that Ralph was living in the home of his uncle Franklin Pollock. If Ralph was really "Baby," what happened to his dad Harvey? And if Ralph wasn't "Baby," then whose son was he?

Let's first take a look at the household of Harvey, father of "Baby." This family included Harvey's wife, Mary M. Pollock, two daughters and four sons, including "Baby." In case something horrible did befall Harvey before the 1900 census, that meant we'd be searching for a family constellation including at least the latter part of the string of names of the children: Lawrence, Florence, Alvin, Franklin, Baby, and Rosa May.

Thankfully, the state of Colorado had taken a census in 1885—a much more helpful gap than having to wait the twenty year span to 1900. I began searching that record set, using the names of the oldest children first. While I couldn't find anything for the eldest, Lawrence, I did locate a Florence Pollock in that census and pulled up the result.

The census taker hadn't done this page justice. Besides applying occasionally abysmal handwriting—prime example being the head of household for the Pollocks—he had mixed a boarder right into the midst of the family entry, and then, hadn't even written the names down in age order. Still, that result left us with a Lawrence, a Florence, a Franklin and a Rose. Close enough for me.

Upon a second look, I realized that the 1885 entry for Wilbur might have been the same as the 1880 entry for Alvin W. Pollock, so it seemed we located the right family—all except for one discrepancy. The wife of the missing Harvey—whom I noted was reported as a widow by this point—was not listed as Mary M., as she had been identified in 1880, but as Margaret. Well, at least I think the handwriting said Margaret. Perhaps it was wishful thinking.

Still, how many Mary Ms do you know who turn out to be Mary Margarets? All the family's ages seemed to be in the right ballpark for this to be the late Harvey Pollock's family. 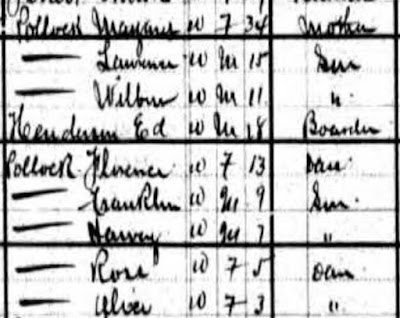 And the one who would have been the right age to be Baby? The one listed as a two year old son in the 1880 census would have been seven years old in the 1885 Colorado state census. There was a seven year old in this household, too: his name was Harvey, the perfect explanation for why the family preferred to call him Baby, back in 1880. He was named after his dad, who had apparently died in 1883.

If Baby wasn't Ralph, then who was Ralph's dad? Not Franklin Pollock—we already know that Franklin was his uncle. Not the deceased Harvey, either. Not any of the brothers, as we determined yesterday, based on where those brothers' wives were born. Something was not adding up here.

Since only one of the Pollock wives had come even close to being born in Maine—as Ralph's mother was reported to have been, according to the 1900 census—I decided to try my hand at locating other documents which could reveal anything further on that suspect wife, Flora, wife of John. As it turned out, John and Flora were married on New Year's day, 1882. He was thirty two at the time; she was seventeen and required her parents' consent.

This pointed out a problem: our Ralph—at least, if we can believe the documents we'd already reviewed—was born in 1881, according to the 1900 census. Forget the problem about Flora coming from Connecticut instead of Maine. She was likely not Ralph's mother, simply according to the dates. In fact, the oldest child in John and Flora's household in 1900 was a daughter named Marion, born in May, 1884.

Where was the mother of Ralph Pollock? My guess was that, since all the Pollock men from the previous generation—except, obviously, for the late Harvey—were still living by 1900, it wasn't Ralph's father who had had a tragic demise, but his mother. Perhaps the sudden need for a wife to serve as surrogate mother of his baby had impelled one of the Pollock men to marry again—quickly. My guess was that that would be John, and that the 1882 wedding was marriage number two for him.

Looking back at the marriage records for Weld County, Colorado, sure enough, I found that there was an entry for the 1879 wedding of John M. Pollock and Emma J. Carleton. This would be the one.

Looking back to that census record, sure enough—and even on the same page as his brother Harvey's household and the family of our Thirza Brown—there was the entry for the young John and his wife Emma, way on the bottom of the page.

Added bonus: notice where she said she was born. Yep. It's Maine.