It doesn't help, when researching a family's history, when even the family members can't be sure which way to spell their own surname. Especially with a name like Brown. How hard can that be?

In the case we brought up yesterday, the size of the original photograph leads me to believe it was actually a carte de visite. It measures approximately two and a half by a little over four inches, much smaller than the cabinet cards which supplanted that earlier format.

If so, that dates the picture to approximately the 1860s. That, if it is indeed a picture belonging in Thirza Cole's photograph collection, would be a reasonable time to place her grandparents—if we can trust her father's 1880 report that he was born about 1848. If Thirza's father Thomas Browne was the oldest child of this parents, that might put the unknown couple's dates of birth around the mid 1820s. Perhaps they would look that "seasoned" by the time this photo was taken.

There's one other thing. Perhaps you already noticed it yesterday. The front of the photograph bears the words, "Jackson,"—presumably the studio's name—and "Grand Rapids, Mich."

In 1880, Thomas Browne reported his birth being in Illinois, not Michigan. His daughters' subsequent own reports of where their father was born do indeed vary from enumeration to enumeration, but they never seem to settle on Michigan as the reported location.

A cursory glance at records in Grand Rapids for that time period didn't seem to reveal much information linked to that name, either.

But there's one constant in all this. Just like all the records I've seen on Thirza's family, even on the back of this photograph, family members were undecided about which way to spell their ancestors' names.

One entry, the first, presuming from the order of appearance, gave the name in a tight, neat hand: "Grandfather + grandmother Browne." Following that entry was a scrawl much like the one causing me the grief of hesitating between the name as "Thirza" or "Thiega."

Perhaps this was the one whose handiwork we've already observed on others of Thirza's photo collection. Whoever it was, it was someone who decided the spelling should be "Timothy and Caroline Brown." 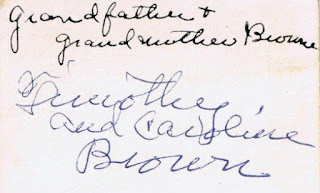 © Copyright 2011 – 2022 by Jacqi Stevens at 2:48:00 AM
Email ThisBlogThis!Share to TwitterShare to FacebookShare to Pinterest
Labels: Brown, Browne, Michigan