Working with common surnames—like Brown, for instance, no matter whether it has that fancy "e" at the end or not—can be frustrating.

We've already discovered that the photograph stash marked with the name Thirza Cole belonged to a woman whose maiden name was Browne. Finding out much about her early years has been a challenge. Had it not been for the unusual detail preserved in her own obituary, I'd likely not have been able to trace her whereabouts during that twenty-year span between the 1880 census and the next surviving enumeration.

But before that point? Even after wrestling with this family's history for weeks now, I am no closer to uncovering something fresh and new.

And then, reaching back to that stash of photographs I rescued from an antique store up in California gold country, I pull out another photograph and notice the names written on the back: Timothy and Caroline Browne.

Could they be Thirza's grandparents? Or just a coincidence, merely owing to such a common surname? 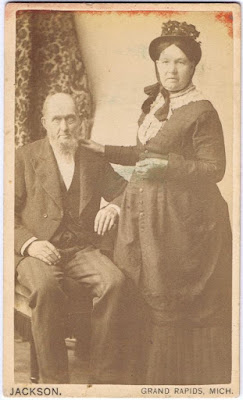 © Copyright 2011 – 2022 by Jacqi Stevens at 2:51:00 AM
Email ThisBlogThis!Share to TwitterShare to FacebookShare to Pinterest
Labels: Brown, Browne