Because She Said I Could


It may seem like I've been in a tailspin the past week or so, but behind the scenes has been some activity. This week will be the time—at last!—to start sharing how some of the photographs in the Thirza Cole collection will be going home.

But before I unwind the stories of the connections—remember, this was a collection of pictures of unrelated (as far as I can tell) individuals—I wanted to get permission to share one thing: a picture.

No, this is not another photograph rescued from an antique store in the foothills of northern California. This picture already has its home. But I think, once you see it, you will appreciate having had the chance to see it too.

The picture, you see, comes from the very person who will soon be receiving the photo of Thirza Browne Cole, herself. I am very glad to be able to send Thirza's picture home to this researcher, someone I found through her thorough family tree posted at Ancestry.com. What a collector of family photos this woman is! You can understand why it's a reassuring feeling to be able to add to her collection: family photos evidently mean much to this person, and she is willing to share them on her family tree at Ancestry.

Look carefully at the composition below, and you will see as the little girl in the center, none other than Thirza's only daughter, Pauline, the one who, widowed, died in her early twenties. Pauline's parents, Thirza and William Cole, stand behind her. Will's brother Howard and his wife Bertha complete the picture.

The picture affords us a wonderful snapshot in time for Thirza and her family—an earlier version of the woman whose picture I found, plus a glimpse at what her husband and daughter looked like, too. Of all the ones in Karen Cole Eaton's many uploaded photographs on Ancestry, I think I'm drawn to this one the most.

Thank you, Karen, for sharing so many of the Cole family memories in picture form. It's such a treat to know that Thirza's photograph is going to a family history keeper who cares so deeply about preserving the family story! 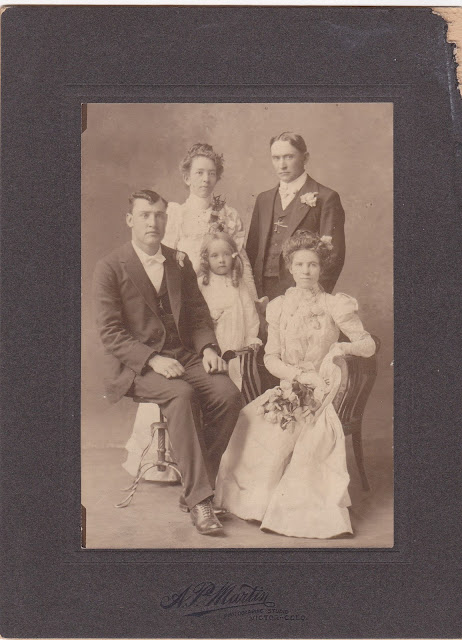 Above: Photograph of Thirza and William Cole and their daughter Pauline, standing behind William's brother Howard Cole and his wife, Bertha. Photograph courtesy of Karen Cole Eaton; used by permission.
© Copyright 2011 – 2022 by Jacqi Stevens at 2:48:00 AM
Email ThisBlogThis!Share to TwitterShare to FacebookShare to Pinterest
Labels: Brown, Browne, Cole, Family Photos