The verdict is in: yes! Ralph is going home, too. Well, I mean his photo, that is. I heard from the Pollock descendant who gave me all that fascinating detail about Ralph's life after he left his childhood home in Colorado, so now I have directions on where to send young Ralph's photograph.

Out of all the photographs marked "Thirza," I have yet to track down a Van Noate descendant for the hundred year old picture of baby Louise. I mentioned the other day about posting baby Louise's photograph on our local genealogical society's Facebook group, and I did get a few general suggestions, and one member sent me a rather complete copy of the family's tree. But as for how to contact a living descendant, well, the best suggestion was to try poking around on Facebook.

So I did. And found someone. The problem is, no matter where I look, I can only find rather distant relatives. The same went for the trees on Ancestry.com. There were about six different Ancestry subscribers who had Louise in their family tree, but every one of those trees was posted by someone who must be much like me—a little bit too enthusiastic about their genealogy. And what I'm seeking is a close relative, not a seventh cousin twice removed. But, using another tactic, I found that possibility.

The nexus is a grandchild of Louise's husband's brother. At least, I think that's the connection—and, trusting that the trees where I found the family line are actually accurate, it looks like that's the closest I'll get to contacting someone who might know how to get in touch with Louise's grandchildren.

Of course, that leaves the squishy part of contacting a stranger, out of the blue. It is definitely so much easier to research dead people. Even sending an email to a living descendant of a dead person isn't too difficult. But going straight to a relative of a relative of a relative—who doesn't even show the slightest interest in genealogy—well, that's a challenge I'm not sure I'm up to. Yet.

Give me a couple days and we'll see whether I chicken out. Baby Louise may just have to remain in that folder on my desk until a closer relative stumbles upon this post via our research assistant, Google. 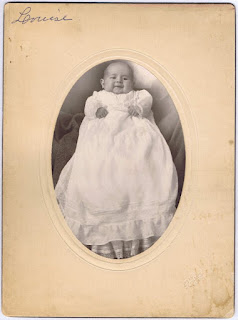