Gradually, the photograph collection of Thirza Browne Cole is finding its way home—or, at least, finding its way closer to descendants who are interested in receiving one of these hundred year old pictures. The only thing I lack, in one case, is an address. In another case, I still need to locate the descendant.

I still have resources, of course. In the case of baby Louise, since she lived in a city near my own home, I posted a request on our local genealogical society's Facebook page. Hopefully, someone on that site will know someone who knows someone—and that six-degrees-of-separation shuffle will serve up a possible recipient. In a best-case scenario, that is. If not, I'm sure our prolific Cole researcher, Karen, would be happy to add it to her family history collection.

The behind the scenes news about Ralph C. Pollock, however, is different. Ralph is the young man from Greeley who, after the loss of his mother, was raised by an uncle and aunt. As far as we could see from census records and other documents, Ralph attended college, receiving a degree in chemistry which led him to research positions in California.

This was all confirmed when, thanks to Ancestry.com, I located a researcher of the Pollock line who turned out to be a direct descendant. This researcher was kind enough to send me photos and news clippings explaining some of Ralph's later accomplishments and interests—Ralph apparently was still able to do handstands, walking on his hands and doing series of pushups, at age eighty. A plus was the discovery that Ralph had a "deep interest" in his family's history, and had left handwritten notes of his research.

While all this is encouraging to hear, it still doesn't resolve one tiny detail: where to send the photograph. And so, I wait. Such a small detail that stands between Ralph's abandoned photograph and his return to family who knew and cared about him. But I'm patient. After all, it's been well over one hundred years since these families last held these photographs. What's a few more days' wait? 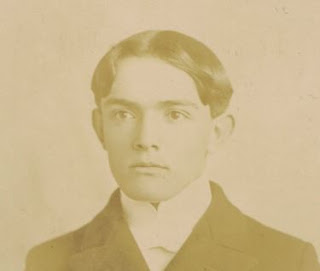 Above: Photograph of a young Ralph C. Pollock of Greeley, Colorado, possibly dated prior to 1900.
© Copyright 2011 – 2022 by Jacqi Stevens at 2:54:00 AM
Email ThisBlogThis!Share to TwitterShare to FacebookShare to Pinterest