Just a baby whose infant photograph taken in Greeley, Colorado, somehow ended up in California, Mildred "Rigg" turns out to be someone whose descendants live not far from me. And thankfully, now that I've corresponded with two of those family members, Mildred is heading on her way home.

Mildred's picture was one of several added to the photograph collection of Thirza Browne Cole, another Greeley resident who moved, eventually, to northern California. I'm still not sure what the connection was between Thirza and the family of baby Mildred—even after puzzling over it with her descendants—but I think it's safe to say it was just another token of how much Thirza seemed to care for those she met along the way in life.

As I've done for the other abandoned family photographs sent home, I first looked for descendants among those posting their family trees on Ancestry.com. With a little time and an eye to detail, it is fairly easy to determine those who have put in a lot of time on their research, as opposed to those for whom genealogy is just a passing fancy. I like to look for those for whom this means a great deal. I also like to seek out the closer relatives, rather than those over-zealous researchers (like me) who have constructed enormous trees with multiple branches of very distant cousins.

The researcher I found to make first contact with, in Mildred's case, deferred to a closer relative, and forwarded my information along to this person. I am happy to say this recipient is apparently one who has had a longstanding history of researching family, for he mentioned using Ancestral Quest as his genealogical software, a program first developed in 1994 and most often associated with the Personal Ancestral File program formerly provided by FamilySearch.

I'm always encouraged when I discover that an effort in "giving back" actually goes to benefit those who helped newbies like me, decades ago, because I recall that time period as an era in which there were so many who freely gave of their time and expertise to help others develop their genealogical research skills. This little token of rescuing abandoned family photographs is my way of giving back, in memory of folks like those, back in the 1990s, who helped me when I first tried to bridge the gap between the hand-to-hand combat of wrestling with real, live—and dusty!—documents in archives to viewing their pristine facsimile in virtual format online.

So today, off goes Mildred to a descendant who understands the efforts of genealogical research and values remembering the inter-generational connections between family. 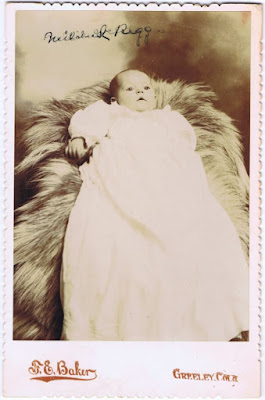 Above: Photograph of Mildred "Rigg" from Greeley, Colorado, dated about 1898; picture currently on its way home to one of Mildred's descendants.
© Copyright 2011 – 2022 by Jacqi Stevens at 2:47:00 AM
Email ThisBlogThis!Share to TwitterShare to FacebookShare to Pinterest
Labels: Brown, Browne, Cole, Colorado, Family Photos, Giving Back, Riggs