Not Enough Pieces to Solve this Puzzle


When I first found the photograph I showed you in yesterday's post, I thought there was enough information to figure out how to send it home. That was then, in the excitement of the moment, sifting through dozens of photographs with my genealogy angel and good friend, Sheri Fenley.

Now, I'm not so sure I can do it—deliver that photograph back home to family members, that is. Some of the information can be interpreted in more than one way. There's a lot of wiggle room on another piece of the puzzle. And a slight problem with the handwriting.

Still, it's worth the try. So, today, I'll show you what we have to work with, and some of my misgivings about what I'm seeing on the reverse of the photograph. Tomorrow, we'll dig in and see if any of the details can actually lead us to some solid data.

The first detail that had convinced me that it was possible to successfully complete the mission was the fact that the two children were named and given ages. There were a couple problems, though. One was that the person writing the names was not writing in English, but French—but hey, a little high school French should be sufficient to tackle this part of the equation. The second detail—admittedly, a small one—was that the word I presume the writer meant to signify the English word "and" looked more like "el" than "et."

More than either of those trifling annoyances, though, were two other issues. One was that the postcard stamp box—a detail hobbyists often use to help narrow the date range—was the Azo design assumed to have been used any time from 1904 to 1918. That, as you'll see, takes away from the small victory of realizing that the two children's ages had been given on that same postcard detail.

The biggest doubt, though, is the very last word written on the postcard. At first, I thought it might be Hallie, which was part of the reason I bought the card in the first place. If you remember the photo of Baby Fay, you may recall that Fay's mother's name was Hallie. But once I researched the full story on Hallie Randall, mother of Baby Fay, I realized her story wouldn't match up with a photograph of other children—especially one written in French.

On second review, I thought better of my snap judgment, and realized the name was likely Hallee. My next task, therefore, will be to find anything I can with either of the children's names plus the surname Hallee. We'll get to that, tomorrow.

In the meantime, here is what we were left with, most likely written en français by a proud mama some time between 1904 and 1918: 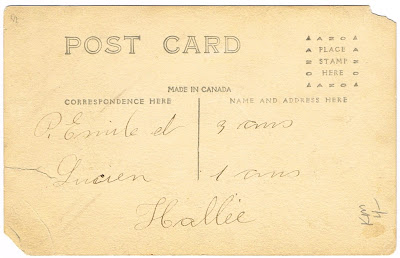 
© Copyright 2011 – 2022 by Jacqi Stevens at 2:55:00 AM
Email ThisBlogThis!Share to TwitterShare to FacebookShare to Pinterest
Labels: Family Photos, Unidentified Faces