Thankfully, the mother sending a picture of her darling daughter—five weeks and two days after her birth, to be precise—happened to sign the photo postcard with her full name and city of residence. That makes things a tad easier for us, now one hundred years after the fact, as we try to figure out how to return the abandoned treasure to an interested family member.

We know, for instance, that the mother shown in the photograph was named Hallie Randall, and that she lived in Bandon, Oregon.

Because the photograph came on the format of an Azo postcard, we can tell from the direction of the tiny arrows in the four corners of the stamp box—all four facing upwards—that the card was used between the years of 1904 and 1918. 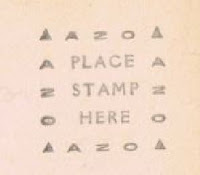 The photograph on the front of the card gives a sweet profile of the young mother and her infant—as we'll discover later, her firstborn. But to simply head to the United States census for Bandon, Oregon—either in 1910 or 1920—to find a Hallie Randall with baby daughter Fay, well...you knew that would be too easy. Of course there is going to be a problem with such a straightforward approach.

There was a baby Fay with mother Hallie, of course, but not where we'd have expected them. It took a little more searching—though not much—to discover not only where the family set up housekeeping, but who the baby's father was, as well as to learn that "Fay" was actually the baby's nickname. Her full name was Fayetta Mae Randall. 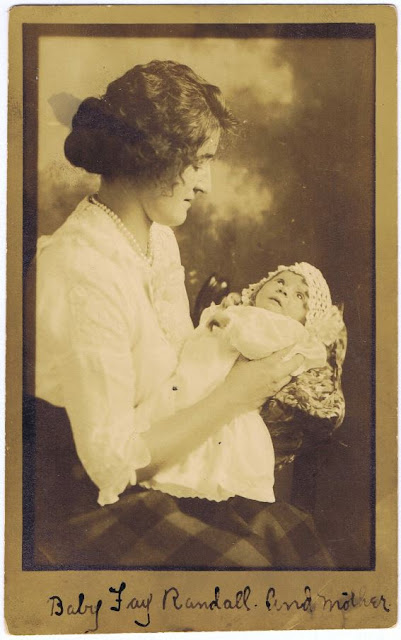 Above: Azo postcard from Bandon, Oregon, labeled "Baby Fay Randall and Mother," circa 1918. Postcard from Hallie Randall currently in possession of the author.
© Copyright 2011 – 2022 by Jacqi Stevens at 2:43:00 AM
Email ThisBlogThis!Share to TwitterShare to FacebookShare to Pinterest
Labels: Family Photos, Oregon, Postcards, Randall