Where Progress Needs to be Made


There is nothing so helpful, when stymied with a genealogical problem, as to diagram the situation. Thus, out have come the pedigree charts to visually represent the sore spots in my research progress.

Looking at the maternal lines I'm researching—both mine and my husband's—the visual representation seems to indicate a rosy state of research health, although I know there is much more to document in those family trees. When it comes to each of our paternal lines, though, the story is quite different.

Take my husband's father's line, for instance. While I can at least claim to know who each of his second great-grandparents were, that is one generation short of the progress I've made on the mothers' lines. Of course, both of those mothers sported ancestry that stretched back to the 1700s in America, making research a bit more streamlined, thanks to the abundance of accessible local records. For the two fathers' lines, I assure you that is not the case.

In my father-in-law's line, for instance, immigration from Ireland introduces the difficulties inherent in a Catholic heritage in a land ruled by Protestant England. It is not easy to locate records before the 1820s, yet several of my husband's second greats were born before that time. This is a problem.

Still, at year's end—what? You say it isn't even Thanksgiving; how can I mention the new year at such an early juncture? Easy: it will be here before you know it—this is a good time to take stock of progress (or lack thereof).

There are two main challenges involved in researching the Stevens and associated family lines. The first is the two-country immigration route; the Tully branch's emigration went through Canada before arriving in the United States—and then, in some cases, returned to western Canada.

The second challenge is that there are some branches of this family for whom I have no county of origin in Ireland, much less pinpointing the precise townlands from which they came. This includes the patrilineal Stevens line itself, along with the origin of Stephen Malloy, who may or may not have come from County Limerick.

Even for those lines for whom I already have a confirmed county of origin, I am having trouble locating any mention of the family in church records. Granted, there is now such an improved means of access to such resources as baptismal records, so it would likely produce some promising results if I were to revisit those records now. If such a repeat exercise yields the names of some parents, it would help me push beyond the roadblock preventing me from discovering fourteen of the sixteen third great grandparents on my husband's paternal side.

Of course, there is the hope that future DNA matches will help provide answers. I already have one connection on that list of mystery third great grandparents with whom I'm working. We haven't figured out the answer to our question yet, but at least we have the assurance that our mutual family lines are indeed related. The more that DNA testing companies reach out to customers in other lands, the more likely it will be that we see matches from our ancestral homelands. I have heard several people have experienced that result for their Irish roots, so there's hope that our Stevens line can do an end run around those paper trail road blocks, too. 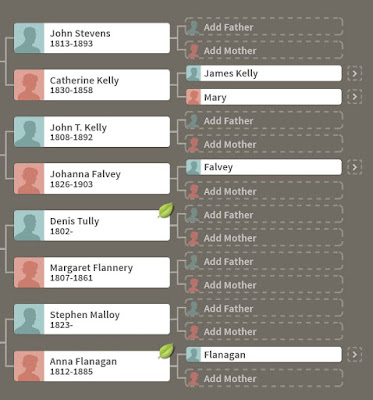 Above: Where I'm stuck. It's easy to see my work is cut out for me in this segment of my husband's pedigree chart, showing his second great grandparents on the left, and the sole named couple on the right representing the only third great grandparents for whom we have any documentation at all.
© Copyright 2011 – 2022 by Jacqi Stevens at 2:44:00 AM
Email ThisBlogThis!Share to TwitterShare to FacebookShare to Pinterest
Labels: County Limerick, DNA Testing, Ireland, Malloy, Stevens, Tully