Focusing on One Surname at a Time


Some surnames seem to be so rare that it is virtually impossible to find any record of them at all. Then, having given up the chase, the surname seems to pop up everywhere—everywhere, that is, except for the very location in which you had hoped to find it.

That happened when I was researching my husband's Falvey line in Fort Wayne, Indiana. While it is not what you could consider a rare surname—Ancestry pegs the surname Falvey as having a distribution of up to thirty two families in each of twenty three states or territories in the U.S. by the time our Falvey ancestors settled in Indiana. At that time—1880—Massachusetts and New York had up to 190 Falvey families resident in each state, while the state our immigrant Falveys chose for their new home may have had only thirty others or less in the entire state claiming that same surname.

Yet, even though I couldn't find any Falvey relatives besides our immediate family in Fort Wayne, I did find some other Falveys living in the same city.

You can be sure that was a tantalizing discovery. Surely, I thought, these people had to be related to our Falveys. Why else would they have chosen to move straight to Fort Wayne from their point of entry into the country? But I could never find a connection.

Meanwhile, I learned a lot about the Falveys in Fort Wayne...

The same thing happened when I encountered what surely has to take the prize as the rarest of surnames in my pedigree: Aktabowski. After all, when researching that name back in the 1990s, I discovered Herby listed only one family with that surname—living in Warsaw—in the entire country of Poland. Talk about rare.

When I encountered the not-surprising result of very limited hits to my search through American records for that same surname, I couldn't resist the lure of finding others with that surname. What did it matter these other Aktabowskis were Chicago residents when I was looking for people living in New York City? They just had to be related, I reasoned. Anywhere I could find an Aktabowski, I followed the trail. As it happened, some did turn out to be relatives.

Hearing about the research pursuit known as One-Name Studies, I found it to be a concept with which I could definitely relate. I had already been doing that—admittedly, in the face of unyielding brick walls—so it seemed reasonable to realize that there might be a lot of people out there, curious about trying that same approach.

As it turns out, there are a lot of people out there, focused on researching a specific surname—not necessarily for sheer genealogical desperation, but out of a desire to spot broader trends or context about the surname's origin. Take the many Y-DNA projects, which in essence are based on surname studies, as an example. The major sponsor behind many of these projects, Family Tree DNA, now claims to have over nine thousand DNA projects they are hosting, many of which are classed as Y-DNA Surname Projects.

While DNA projects may be too high-tech for some researchers, the tried-and-true Family Association approach—and variants such as clans—also lend a hand to those who wish to study everything having to do with a specific surname. Cyndi's List, for one, contains an enormous listing of not only the many surname DNA projects, but a comprehensive guide to all family associations devoted to the study of a particular surname.

It may seem that this endeavor logically grew out of a curiosity similar to mine, when I was faced with the frustration of finding, say, any Aktabowskis—just not my Aktabowskis—but I have found the one-name approach has grown far beyond that happenstance into a much more organized approach, with the establishment, in the U.K., of the Guild of One-Name Studies.

Mainly because I want to familiarize myself more with the Guild's services, I'd like to take some time, tomorrow, to delve into just what the Guild of One-Name Studies actually accomplishes, courtesy of their many devoted members. 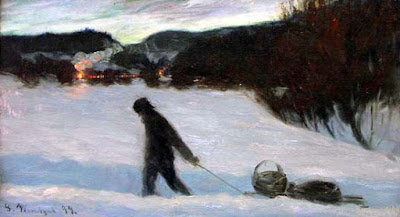