There are skills a genealogist possesses that can sometimes be cross-applied to other research pursuits. Over this holiday weekend, on an online community built for neighbors to keep in touch with each other, the idea was hatched in our locale to gather stories of the history of our community.

Instantly, the conversation thread was alight with buzz over the idea. People love to see history unfolded before their eyes, apparently. Everyone wanted to share a story heard from their grandparents about people who once lived here, decades ago. Some talked about their families settling here one hundred years ago. Names that are now on our street signs were surnames of the long-gone neighbors these people were remembering.

The challenge to such a project is that our community is, well, just that: a community. We don't count as a city; we're not incorporated, and with the anti-growth attitude around here, we may never have the tax base to form our own geo-political place. We can't even call ourselves a town, since our state doesn't include such terminology in their lexicon. The county board of supervisors gives us a nod with the designation, Municipal Area. But don't indulge yourself with visions of urban settlement; we are definitely the hub of a rural area.

Still, there is a community cohesiveness to our little cluster of acre-and-a-half parcels. And a history to go along with it. Better yet, we are a collection of people who have stories to tell—and they really want to tell those stories!

It didn't take much thinking about this kernel of a project to realize the skills a genealogical researcher can bring to the table. Only because of the holiday rush did I resist the urge to start pulling up records on Thanksgiving day, itself—but I know I can, and can picture the tangible excitement that would result over it when this group of neighbors gathers together to discuss their concepts of how this idea can become reality.

When groups are in a formative stage, the notion that something important is in the making is somehow not yet grasped. Perhaps it is because everyone involved in turning the dream into reality is too busy to realize that, in that very action, they are concurrently unfurling history, as well. Journaling the process as progress is being made is sometimes only the purview of those with precocious insight. The prevailing thought is: we aren't doing anything exceptional; this is what any reasonable person would do, given the circumstances.

Yet, aren't we grateful when we realize—afterwards—that someone thought to capture the daily grind for future reminiscence? 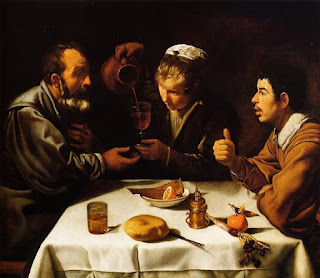 Above: "The Farmers' Lunch," 1618 oil on canvas by Spanish artist Diego Velázquez; courtesy Wikipedia; in the public domain.
© Copyright 2011 – 2022 by Jacqi Stevens at 2:49:00 AM
Email ThisBlogThis!Share to TwitterShare to FacebookShare to Pinterest
Labels: Leave a Legacy, Local History, Reflections on Community