When we consider pedigree charts in our current times, we expect to see a graph branching with each preceding generation. Our two parents expand to four grandparents, then eight great grandparents. With a geometric sequence like that, by the time we reach back six generations or more, we start to see some serious number progressions.

Or do we? Some of those lines, at least in some families, don't branch quite as regularly as we presume in our modern times. For those families with colonial settlers in the 1700s, it is not so surprising to discover cousins marrying. Likewise for those Acadians, expelled from the eastern, formerly French colonies in by-then British-controlled Canada and settling, eventually, in Louisiana. For endogamous populations like the Ashkenazi Jews, this intermarriage is demonstrated multiple times over, through their generations-long history.

While it may not be an expected geographic location lending itself to typical endogamy, the small community where my mother-in-law was born had what I'd like to dub endogamy-lite. From 1818, the time of the early Catholic settlers who established the first Catholic church in Ohio, Perry County had been host to small enclaves of Catholic settlers, including the families from which my mother-in-law descended. Over the years, the names written on neighboring farm parcels in the county's plat maps became the same names taking their places in the family's pedigree chart. The small rural community soon became a place where everyone seemed to be related to everyone else.

From the time of her high school years in New Lexington, students used to joke that, since they were all related, before a guy could ask a girl out on a date, he had to produce his family's pedigree chart. It would do no good to fall in love and then discover the couple was actually second cousins.

While my mother-in-law may have thought she had escaped repeating that dilemma by marrying an Air Force man from Chicago, it actually turned out that her beau was the cousin of a family living in town. Though I haven't yet explored that possibility, I wouldn't be surprised to learn that when Norma married Frank, she married a man who may have been remotely related to her own extended family.

I got so used to this scenario as I began tracing her family tree that it became easy to spot those surnames in fellow researchers' paperwork. Just reading a forum post that mentioned Perry County and surnames like Flowers, Metzger, Snider or Gordon told me that, with a quick question, I'd learn of a new third or fourth cousin—and off we'd go, comparing pedigree charts and filling in the missing details in each other's genealogies.

Once DNA testing entered the picture and my husband encountered some matches estimated to be between second and fourth cousin—but turned out to yield two related lines, each at the level of sixth or seventh cousin (and yes, we have the paper trail to go back that far)—that became my inspiration to start up a new group project at Family Tree DNA. Since everyone seemed to be joking about how everyone in Perry County is related, I wondered whether genetic genealogy would bear that out.

So now, while I'm reviewing each of our family lines needing more research attention, I'm considering what can be done with my mother-in-law's line. Of all the family lines I'm working on, hers is the most complete, mainly because the nature of the people settling that geographic area lent itself well to the pursuit of that family's genealogy.

Admittedly, I am missing the names of eighteen of my husband's fourth great grandparents—each of whom was born somewhere in Europe (I suspect either Switzerland or the region once known as Alsace-Lorraine). But rather than work on that aspect, I've been doing some "reverse" genealogy, following the lines of descent from each of my husband's third great grandparents. Believe me, I have a long way to go before that project is completed.

My to-do list for this part of the family's genealogical research is to just keep at it: wrap up that seemingly endless reverse genealogy project. In addition, I picked up some helpful suggestions for promoting the Perry County DNA group project at the conference last weekend, which I need to implement. Also on my to-do list for my mother-in-law's line is that long-languishing goal of proving a supplemental line on behalf of my daughter, opening up a patriot connection enabling my sisters-in-law to join Daughters of the American Revolution.

Sometimes, in the morass of multiple project requirements, it makes sense to see that things would get bogged down. That's where I've been with my mother-in-law's line. Getting something completed and crossed off the list would be just the prescription for re-energizing this research arena. 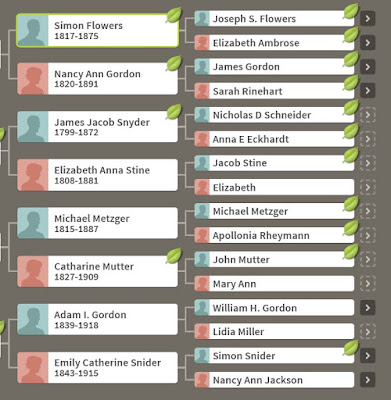 Above: Second and third great-grandparents on my husband's maternal pedigree line, showing work yet to be done on that family's history. (Note the three spellings—Snider, Snyder, and Schneider—belong to the same family's surname and were used, based on spellings in documents verifying details in each man's own circumstances.)