Now that I've decided to take some time to assess where I'm stuck in my family history research, I'm reminded how difficult it can be to pursue the history of a common surname. I've heard groans from people when they realize their research is doomed to determine what happened to a Smith line or a Jones line. But it never occurred to me that a surname like Davis would present any such problems.

Until I tried my hand at my own.

Since I'll be reviewing each of four family trees to wrap up this week, I may as well start with the work on my maternal line. That, incidentally, puts me firmly in the midst of those who must research common surnames—a kind of separating-the-wheat-from-the-chaff exercise.

"Which Davis is mine" is not the only question I wrestle with. A step backwards in time with each subsequent generation introduces other surnames, of course, as my mother's patrilineal procession of Davises blends with the names of their brides. And that is my main pitfall in this line, right now.

For one thing, there is my maternal grandfather's mother's line. Martha Cassandra Boothe married William David Davis in Erwin, Tennessee, in 1885. I'm grateful that her maiden name was captured in history's records, unlike some of the women just one generation before her. Still, in that one generation prior to hers, it is her father's identity that is giving me grief. William Alexander Boothe, supposedly born in Nansemond County, Virginia, in 1812, has defied all attempts at being identified in local records.

In the type of pattern which seems more likely to expect for that era, Martha's husband's mother becomes the other puzzle in this family tree. I know her name was Sarah Catherine Laws and that she married Will Davis' father, Thomas Davis, in Washington County, Tennessee, in 1856. Census records show that she was born in nearby North Carolina, and her headstone declares that her year of birth was 1838. But try as I might, I haven't been able to identify any of her siblings or her parents, so I am stuck at her generation.

In fact, if I look at the pedigree chart for my mother's family, it is only fully completed up to the level of my second great grandparents. Out of sixteen possible third great grandparents, I'm missing four. That's one fourth of the lineup, a significant amount.

Where this comes into play is when I turn to autosomal DNA testing. With the Laws and Boothe lines a big question mark on my records, I often wonder if these are the blank lines whose other descendants are showing up as my DNA matches. After all, the closest matches I've gotten have been at the level of second to fourth cousin. And in some testing companies—Family Tree DNA, in particular—the truth lies somewhat to the far end of that range. That means, in order to align on the paper trail, both my potential match and I need to know our third great grandparents if we want to confirm just how we match. If those most recent common ancestors would be the parents of either William Alexander Boothe or Sarah Catherine Laws, up to this point, I've been out of luck.

Not that that is my only woe on my maternal line. It would be nice to extend lines even further on my mother's maternal side. But as far as DNA matching goes, I have adequate information to field any questions of fourth cousin relationship there. It's the Davis side that needs the work. I have a feeling if I could clear up those two main questions—parents on the Boothe line and the Laws line—I'd suddenly solve the logistics on how I connect with several matches in the queue at two different testing companies. 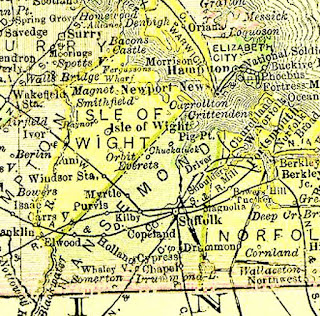