There are some parts of the pedigree chart that seem doomed to be left blank forever. Some secrets are not given up that easily. Barring discovery of my own personal time machine, I'm afraid my father's line may remain one of those instances. It certainly is our family's tree with the least entries already completed and proven.

Looking at the chart below, which shows just the level of second and third great grandparents, it is easy to see I've got my work cut out for me. The problem is: this is the same situation in which I've been stuck for the past several years.

Oh, I have made some progress, admittedly—like when I stumbled upon that website which revealed a free resource for transcriptions of Catholic marriage records for the old Prussian region then known as Posen. But the progress seemed to introduce breadth into my family tree, not depth; I could find more siblings for those second great grandparents, but not a single clue to bridge the gap into the previous generation.

Of course, it helped to also find some corrections to my records. Locating the actual marriage records allowed me to amend names gleaned from anguished memories reported at the point of completing death certificates, years later—yet another demonstration of how it's best to rely on records completed closest in time to the actual event, itself.

Looking at that empty pedigree chart, it's hard to decide which direction to take for a next step. My paternal grandfather's side is entirely blank—a mystery with absolutely no lead in sight. While I'd love to dig up the secret of his origin, I have no tools with which to even start.

My paternal grandmother's side—the parents of Sophie Laskowska from Żerków, Poland—would be a possible next step for research. This, however, comes with a caveat: that I'm willing to brave the tedium of constant translation from Polish to English as I work through websites not originally designed with my native tongue in mind. This is the constant reminder of the convenience of such utilities as Google Translate.

Once again, it may come down to the strategy of boosting my chances of identifying how my twenty two Polish-roots DNA matches are actually related to me. Before I can ever hope to figure out those second-to-fourth-cousin mysteries, I first need to figure out who my third great grandparents are. Right now, I'm one hundred percent in the dark about that. 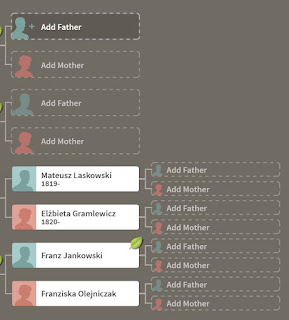 Above: My emptiest pedigree chart belongs to my paternal line. This portion shows known second great grandparents in the left column.
© Copyright 2011 – 2022 by Jacqi Stevens at 2:55:00 AM
Email ThisBlogThis!Share to TwitterShare to FacebookShare to Pinterest
Labels: DNA Testing, Laskowski, Poland