Taking my Cue From Lifelong Learning


One of the differences which delineates adult learners from schoolchildren might well be their reaction to winter breaks and summer vacations. Kids live for that break from the "drudgery" of learning; adults understand if they wish to keep their edge, they need to always keep learning.

I happen to instruct a particularly "young" set of mature learners. Keen on tackling learning challenges, they have signed up for a semester of beginning genealogy. This class, however, has one additional component: a hands-on opportunity for applied research in the local community college's computer lab. (The caveat in this ten session semester is that the class only features online genealogical resources which are free, not subscription-based.)

Yesterday was our last session for the fall semester. As I always do, in the closing hour, I asked each class member three questions about their experience starting out in genealogical research:

Since I'm at a turning point in this blog as well, I thought it would be applicable to use those same three questions here. After all, not only have I just returned home from a genetic genealogy conference—which left me mulling over thoughts about future applications and projects—but I've sputtered and floundered over my last research project and arrived at the conclusion that it would be best to set that one aside for a later date bringing (hopefully) additional information.

At this post-conference juncture, here are my answers to those three questions.

The most surprising part of the FTDNA conference was discovering how wide a spectrum of projects are hosted by such a large number of volunteer group project administrators—and how dedicated some of them have been, over the long haul, to both their project tasks and the concurrent learning curve they've had to mount. Pioneers in the application of DNA testing to genealogy, theirs has been a multifaceted effort, understanding not only genealogy but some of the science behind the tests—as well as legal and business considerations for interfacing with the company and its customers while promoting and growing their own specific project. This year represented the twelfth annual conference, and a good portion of those volunteers in attendance have been to every single one since the inaugural event in 2005.

There were several aspects of this year's event which turned out just as I had expected. The personnel, for one. I have been to enough DNA Days at the ISOGG-hosted annual event held in conjunction with Southern California Genealogical Society's Jamboree in Burbank each June to have met FTDNA President and CEO, Bennett Greenspan, and FTDNA's Chief Scientist, Michael Hammer. I've also heard presentations by them, as well as by staff members Janine Cloud and Jim Brewster, who were visible—and quite busy—all weekend long. The level of expertise visible in each presentation this weekend certainly met expectations adequately, as well as piquing my interest in delving deeper in several facets of group project management.

When it comes to planning what I will work on next, there are several items ripe for my to-do list. Encouraging more eligible participants to sign up for the Perry County, Ohio, project will be Job #1 on that list. While there were several suggestions made about this during the conference, now is the time to apply that elbow grease. And of course, that will take time to do. Behind the scenes, it will also require additional learning as I ply the group projects team with questions about best practices. In addition, since each day's conference proceedings were punctuated by a great networking opportunity over the hotel's delicious lunch, I have several follow-up contacts to make, both with other group project admins I met and with FTDNA staff liaisons who actively seek our input and ideas.

Now that I'm back home after that whirlwind trip to Houston (four thousand miles and fourteen hours of instruction in one weekend), I realize I've reached a second closing point, as well: I've exhausted the research topic of our Kelly family in Lafayette, Indiana, and need to move on to another branch of family history research. That, of course, requires another answer to the question, "What's next?" And unfortunately, that kind of question doesn't always provide an immediate answer. 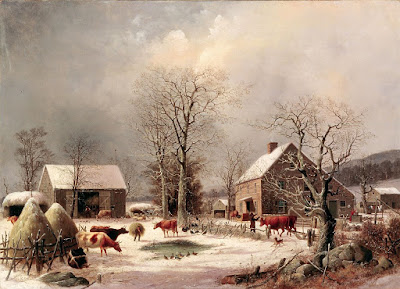 Above: "Farmyard in Winter," 1858 oil on canvas by American artist, George Henry Durrie, whose winter landscapes often were selected to publish as lithographs by Currier and Ives; image courtesy Wikipedia; in the public domain.
© Copyright 2011 – 2022 by Jacqi Stevens at 2:47:00 AM
Email ThisBlogThis!Share to TwitterShare to FacebookShare to Pinterest
Labels: Conferences, DNA Testing