It isn't too early to think about research goals for the New Year. After all, I just spent the last four days staring at the sore spots in the four pedigree charts of my daughter's four grandparents. That ought to be enough to prompt me to action. Let's see what can be gleaned from those four snapshots of current research progress.

For my maternal line, the obvious glaring omissions are my maternal grandfather's Boothe and Laws lines. To be able to push back the records just one more generation would be a glorious feat. Since I also have several X matches on my DNA results which I suspect align with that Boothe line, discovering one more generation's history might also yield me answers to several of my DNA match mysteries. And yet, I'm torn, knowing I have a possible trip to Florida in my near future, which would be the golden opportunity to sort out my McClellan line—something that may only be accomplished by going there in person, as online resources don't include the records I'm seeking.

For my mother-in-law's line, the goals are more clear. First, work on that supplemental line for D.A.R., providing entrance to membership for my husband's sisters and any of their daughters who are interested, too—and to Sons of the American Revolution, too, for any of my husband's nephews who might like to join. Then, I'll be reading up on issues of endogamy in relation to DNA testing, plus working on increasing membership in the Perry County, Ohio, DNA project.

My main challenge in 2017 for my father-in-law's Irish lines will be to park myself in front of the computer and trawl through the Catholic baptismal records for the three counties from which his lines originated in Ireland: counties Kerry, Limerick and Tipperary. This may be a tedious process. If I have any success, I may go from there to thumb through County Mayo, supposedly the origin of our Stevens surname—at least according to his immigration records. In the meantime, I'll be hoping for more DNA matches on that patrilineal side, for it's got me one hundred percent stumped at this time.

What can be said for my own father's line? It has me far beyond merely "stumped." I'm actually considering taking up Polish, if for nothing else than to know the phonics and how to pronounce those strangely marked letters. While American-based genealogical websites have been helpful for my searches for American roots, when it comes to looking up records from the 1800s for those in my paternal heritage, it may be better to look in collections developed by the Polish, themselves. In addition, I'm seriously considering searching for distant relatives who would be willing to do DNA testing. In this line for which I know so little, there is also—not surprisingly—a dearth of matches to my test and that of my brother.

There are so many directions pulling me. It's hard to settle on one course. Still, there is an entire year ahead of me, so I think it is safe to declare more than one goal for each family line. 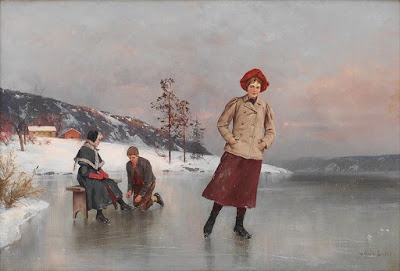