To Shop? Or Not to Shop?


Out of all the Fridays in the year, for this particular Friday, that was never a question. I stay home, warm and toasty and out of the crowd's way. There will be other bargains out there tomorrow. Or the next day. Besides, I've never been driven by compelling market forces shrieking about last-chance sales or holiday commercialism.

There. Scrooge has spoken.

Meanwhile, I am shopping—but it is for an entirely different sort of purchase. I'm making up my wish list for whom I'd like to see participate in DNA testing to help figure out the mystery branches of two specific families. Mine. And my husband's.

In the midst of those extensive trees, I'd love to be able to add information to my father's paternal line—the man who claimed he was an adoptee...or jumped ship while it was in harbor in New York City...or, well, fill in the blanks with another incredible story he might have told my older relatives. At least, those were the ones he chose to tell anything to; he was sometimes reticent to divulge his story, as was his wife.

Then, too, I'd love to figure out connections to the Irish side of my husband's tree—his father's roots. I'd love to confirm where the Kelly line came from. Even more, I'd love to uncover the story of how John Stevens got here from County Mayo, Ireland—at least something about the man to match him up with siblings or parents back home.

Used to be, the advice regarding genetic genealogy was to test your oldest available relatives. That would be great advice if said relatives were still here to be tested. They're not.

Advice now—considering all the tools for "chromosome browsers" and "chromosome painting" from the different testing companies—is to test as many available relatives as possible. The "Lazarus project" from GEDmatch, for instance, can "resurrect" a likely scenario for genetic makeup of those now-gone ancestors, based on chromosome segments inherited by their various descendants.

So I need to put together a strategic wish list. And since holiday shopping is upon us, I'm anticipating some DNA test sales. At least one company—Family Tree DNA—has lowered the bar so much that it's removed the barrier to testing for a great many more people, with its current autosomal sale price of $59 per test (plus, for current customers, additional coupons to help with "bundles" combining that test with either the mtDNA or Y-DNA test). I wouldn't be surprised if their competitors followed suit with their own holiday sales prices—although I haven't yet found any such indication at AncestryDNA or 23andMe.

Testing at all three DNA companies—and learning how to utilize their readouts and analytic tools—was a prerequisite for attending the upcoming DNA Boot Camp class with CeCe Moore at Salt Lake Institute of Genealogy, which I'll be headed to in late January. While I've already familiarized myself with two of the companies—FTDNA and AncestryDNA—and am starting to get up to speed with the third, I'm realizing how helpful it would be to have selected relatives join in the process by giving themselves the gift of a DNA test during this crazy sales season.

At least, none of us has to step outside and brave the Black Friday crowds to do so. 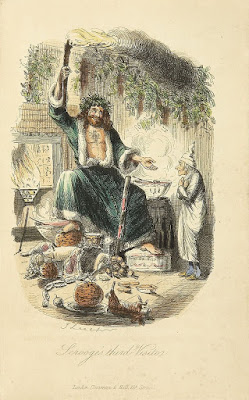 Above: "Scrooge's Third Visitor," British caricaturist John Leech's hand-colored etching in the original edition in 1843 of Charles Dickens' A Christmas Carol; courtesy Wikipedia; in the public domain.
© Copyright 2011 – 2022 by Jacqi Stevens at 2:53:00 AM
Email ThisBlogThis!Share to TwitterShare to FacebookShare to Pinterest
Labels: DNA Testing, Holidays and Genealogy