I’m back to that perennial struggle between staying on the research itinerary’s timetable and stopping to smell the flowers along the roadside.

Admittedly, I’ve spent a lot of time smelling those roses lately. When genealogical research finally makes it back to colonial times in this country, it’s time to really enjoy the scenery. It seems like every surname could be connected to something of significance.

Whether it’s history or a serious case of inbreeding, I don’t know. But it sure is tempting to follow those rabbit trails.

Take this week, for instance. I was truly repentant for my past transgressions of following my nose onto the Tilson line—even though it led me straight to Mayflower Society eligibility. I meant well when I promised I’d head back to the main trail and stick to my original purposes.

But then I stumbled upon another set of surnames that made me wonder. And my resolve faltered.

Yes, I took the detour.

But it was only a small one. Really.

You see, if I want to figure out how my mitochondrial DNA test results lead me back to an exact match with someone who was adopted at birth, one thing’s for sure: I need to stick with the matrilineal trail that leads from my mother to her mother to her mother. There is no deviating from this line. After all, that’s what matrilineal means.

Since I have one of those annoying brick wall road blocks keeping me from moving up that trail beyond my third great grandmother, I will have to engage in some guess work to test the possibilities of who her mother might have been.

Fortunately, as we’ve already seen, I was able to find a Mary “Reiney” in the 1870 census. Along with a Thomas Reiney, she was living in the household of Charles and Mildred Taliaferro. In addition, there was a Minnie “Broyes”—which I suspected might actually be Broyles—in the household.

Could Thomas be Mary’s brother, I wondered. Since Minnie’s mother also turned out to be a Taliaferro, could sixty one year old Charles be the guardian of choice for this branch of the Taliaferro family?

Looking backwards one decade, I was able to locate siblings Thomas and Mary in the household of widowed Mary (Elizabeth Taliaferro) Rainey in 1860. One more decade, and I had located the senior Mary’s husband’s name—Thomas Firth Rainey—in addition to a marriage record for the couple in 1818 Oglethorpe County, Georgia.

Here’s where the guessing game revved up. Next question: so who would have been the mother of Mary Elizabeth Taliaferro? Remember, my quest calls for strict adherence to the matrilineal line—no wandering!

Thinking that there had to be a reason why Charles Taliaferro took in two of Mary Elizabeth’s children after her death, I decided to play the “what if” game and call Charles Mary Elizabeth’s brother. After all, it is possible.

Then the quest was on to find a Taliaferro family which included a brother-sister team of Charles and Mary Elizabeth. While the part about Mary Elizabeth had me stymied, I did know Charles’ middle name was Boutwell, and that there was a Boutwell maiden name in another of my Taliaferro lines.

Checking out the family of Warren Taliaferro, sure enough, there was a son named Charles Boutwell Taliaferro—I already knew this—but he didn’t have a sister named Mary Elizabeth. My only options in this four-child family were sisters Nancy, Sarah and Lucy (who also went by the name Sophia). One published genealogy of the last century noted that Nancy married a Thomas Rainey.

Could Nancy be Mary Elizabeth? Since I’ve yet to find any solid documentation—other than a marriage record indicating Thomas married someone named Mary Taliaferro—I decided to continue playing the “what if” game.

So, what if “Mary” was really “Nancy” and her father was Warren Taliaferro? Who did Warren marry?

The answer to this, according to various published genealogies, was Mary Meriwether Gilmer. (And, because Warren died fairly early in their marriage, Mary married, second, a man who likely served as her family’s minister, Nicholas Powers, with whom she went on to have six additional children.)

This Mary becomes the next entry in my hypothetical matrilineal line, then. And the question moves on to be, “And who was her mother?”

By this time, the repetition of the name Meriwether, coupled with the addition of the maiden name Lewis, started to ring a bell.

Ding! It’s Rabbit Trail Time! What name do you know that contains both a Meriwether and a Lewis?

You know I went to check that one out.

Gone was the pursuit of matrilineal lines. Now I wanted to follow that Meriwether line as far back as I could. I wanted to make some connections. To continue the genealogical litany, Thomas Meriwether Gilmer was son of Peachy Ridgeway Gilmer—yes, that was his name—and his wife, Mary Meriwether.

Ah ha! That’s where the Meriwether surname came in!

Jumping tracks to follow her name—and, in case you’re lost, no, that would not be part of my matrilineal line; now it’s just for the sheer curiosity of the joy ride—Mary Meriwether, wife of Thomas M. Gilmer was daughter of Thomas Meriwether and his wife, Elizabeth Thornton.

Now for the long descent down the other side of the family mountain.

Mary, daughter of Thomas Meriwether, had a sister named Lucy. According to Louisa H. A. Minor’s 1892 The Meriwethers and Their Connections, Mary’s sister Lucy was “a woman of sterling sense and admirable qualities.”

Lucy was one of those women of that era whose husband’s early demise was followed by another marriage. Though I don’t know why Lucy’s first husband died, I do know his name and rank: Colonel William Lewis.

Lewis? Ah, now you sense what I’m after. A wedding in which a maiden name might be blended with a married surname.

And what do you get? Meriwether Lewis. 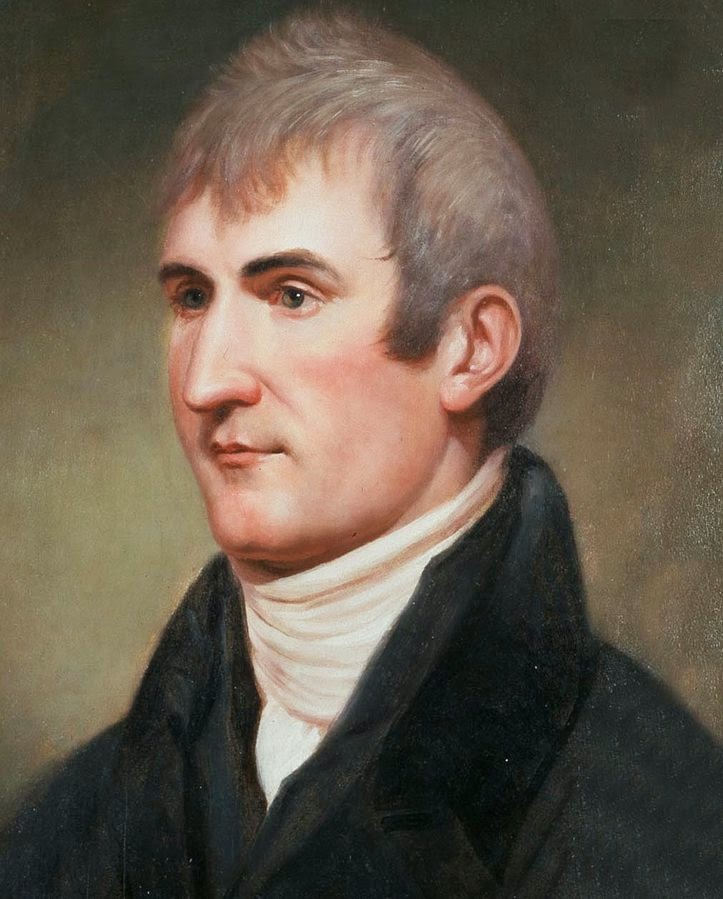 Above: Portrait of Meriwether Lewis, circa 1807, by Charles Willson Peale; courtesy Wikipedia; in the public domain.
© Copyright 2011 – 2022 by Jacqi Stevens at 2:52:00 AM
Email ThisBlogThis!Share to TwitterShare to FacebookShare to Pinterest
Labels: Broyles, DNA Testing, Georgia, Lewis, Meriwether, Rainey, Taliaferro