The beauty of finding legal documents regarding the siblings of one’s ancestors is amplified only in proportion to the difficulty of uncovering the details about one’s own direct line. In my case, my grandmother Sophie seemed to make it so difficult to trace her whereabouts that what little could be found was nearly useless. She had changed her name in so many ways—and had, mostly, seemed to not even want to be found.

Sophie, however, had a brother. And that brother John was too settled, too steady, too reliable to have had his whereabouts hidden—at least in his adopted homeland. New York City being what it is, though, access to personal records was something best arranged in person—or at least through snail mail. Online records hadn’t yielded me what I sought—at least, not until now.

This week, however, looking at John’s naturalization records, I no longer have to guess about his origins. His Petition for Naturalization, which finally was wrapped up in 1923, clearly indicated I was looking at the records for the right person. He had mentioned his wife Blanche—in two different places, so intent was he on insuring that she be included in the proceedings—as well as the six children still living with them in the Queens borough neighborhood of Elmhurst: Elizabeth, Severa, Frances, Walter, Rita and three-year-old daughter Blanche.

In addition to confirming the names of his children and his address, the record attended to the tracing of the naturalization paperwork, since John had begun the process while living near the rest of the extended family, back on Berry Street in Brooklyn. This necessitated overseeing the transition of the 1916 paperwork from the original jurisdiction in Kings County, New York, to Queens for the completion of the process in 1923.

What was priceless to me, though, was discovering John’s assertion of where he was born. This had been a piece of the puzzle that had eluded me for the decades in which I had been pursuing my paternal line. Although their ethnic origin had been kept a secret over the years—the cousins of my generation not really knowing the full story, and even now not understanding what happened during those times—we had eventually agreed that the family’s heritage was Polish, contrary to our elders’ insistence that they were really Irish.

The city of origin, however, I couldn’t quite figure out—even after having discovered a clue through the slip of an enumerator’s pen during the 1920 census. Posen—the place indicated in that census record—was not necessarily only a city or town, however, but could also have referred to a region.

I still didn’t know, for sure, where the Laskowski family had originated, when I received one of those contacts every genealogist dreams of getting: a message from a distant cousin.

Despite the amount of sniveling I’ve done over the years about how other researchers get these fabulous contacts while I get nothing, that is not entirely true. Though I’ve only experienced such chance connections a few rare times, I do have to admit, the quality makes up for the quantity.

Several years ago, someone emailed me because of a post I had made to an online genealogy forum about an unusual surname linked to my Laskowski relatives. I had counted on the tactic of using this more unusual name to help zero in on solid connections, but the name had seemed so rare that it yielded no results at all—for a long time.

All that can change with just one email. For me, that change was the beginning of a longstanding communication with a Polish relative—a distant cousin—who was happy to share what she knew of the family since that point of John’s naturalization paperwork in New York.

To tell the rest of this story, I need to insert a bit about this distant cousin’s family story. Her ancestors, John’s cousins, had at one point lived with his and Sophie’s parents in Brooklyn. Sometime after the first World War but before the advent of the following war, part of that family had decided they liked life better in the Old Country, and returned from New York to Poland. Of course, that decision inserted them right into one of the worst episodes of modern history.

Long story short, in order to survive the devastation, this distant cousin’s ancestors moved from the city where they had settled in Poland to another, safer haven. Once the war was over and they were able to do so, some of that family chose to move again. Whether it was to return to an ancestral home or to remove to yet another, more favorable location, this younger cousin didn’t know. This was all before her time.

She did mention where that part of the family moved, however. It was to a small place called Żerków—a town now boasting only two thousand residents.

I tried discovering what I could about Żerków but my go-to online resources, like Wikipedia, didn’t have much to say about the place. One thing I did learn, though, was that Żerków is located thirty three miles east of a place called Poznań.

Poznań, if you’re wondering, is the Polish name for the place the Germans used to call Posen.

Fast forward to this past week. I am sure, by now, you are guessing I told you this incident for a reason. You are likely right.

In both John Laskowski’s Declaration of Intention and again in his Petition for Naturalization, he stated that the place of his birth was none other than the town of Żerków.

I should have known. 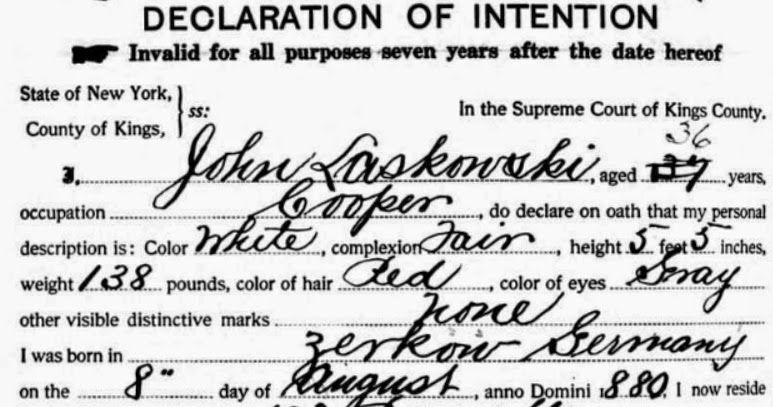 Above excerpt from the Declaration of Intention, signed by John Laskowski in Brooklyn, New York, on August 10, 1916, courtesy Ancestry.com.
© Copyright 2011 – 2022 by Jacqi Stevens at 2:54:00 AM
Email ThisBlogThis!Share to TwitterShare to FacebookShare to Pinterest
Labels: Brooklyn NY, Immigration, Laskowski, Naturalization Records