Signing up for online services is not my forte. Late at night is not my best time. I don’t know why I would have thought a combination of the two would make a winner. It’s best I aborted my mission late the other night in favor of a more sane time and approach.

The task I had in mind was obtaining a copy of the supplemental volume to Mercer Tilson’s 1911 publication, The Tilson Genealogy. Since I had so easily obtained a copy of the public domain title through Internet Archive, I had hoped the same could be attempted for its more recently issued supplement.

Let’s just say the interface for obtaining more recent books on loan online is not quite as user friendly as it could be. Something was lacking in the translation, and I found myself wandering around in cyber circles on the Internet Archive site. Same for the Open Library site. When stuff like that happens, it’s time to push away from the computer table and call it a night.

Back, fresh and rested, I saw considerable improvement in that online site yesterday. It’s amazing how that happens.

With a fresh attempt, I was able to sign up for an online account and check out the book yesterday, for which I was thankful. I was hoping this book would contain the explanations to some of the confusing discrepancies I had found in the 1911 genealogy.

Opening the supplement, Tilson-Tillson Descendants, I took some time getting oriented to the layout of the volume. The first thing that caught my eye was the preface, explaining how the supplement came to be. Published by Gateway Press of Baltimore in 1978, the book was actually the creation of “The Tilson Book Committee.” These five Tilson/Tillson descendants—Kenneth Keator Clark, William Tillson, Mary Davis Kidd, Maude Dudley Snyder, and historian Marjorie Tillson Cross—completed their task in July, 1978, at Tillson, New York.

It was that very place—Tillson, New York—that inspired the whole process, according to the preface to the supplement. Tillson, a hamlet in the Hudson Valley county of Ulster, must have been founded by a namesake from this same family line—although I couldn’t find out who that might have been from a cursory shuffle through online resources.

At any rate, owing to a letter sent from Texas—by a Tilson descendant, no doubt—to the postmaster at Tillson, New York, asking about the “Tillson” family, first one, then several other descendants joined together to explore what could be done about adding a supplement to the original Tilson genealogy. By 1974, a Tillson reunion garnered forty participants.

By 1975, enough descendants were on board with the project to raise funds to reprint the original Mercer Tilson volume. In addition, a committee formed to gather information on “as many descendants as could be found of Edmond Tilson” of Plymouth, Massachusetts records dating from 1638. The result of that work was the supplement I have just accessed.

The supplement was organized into four sections, each focusing on descendants of a separate branch of the fifth generation descendants from Edmond Tilson. The first section was my focus: that of William Tilson and his wife, Mary Ransom.

I was ready to turn pages! But I soon realized the unfortunate impact of the statement from the preface, “We regret omissions, but records were not made available.” Though the committee mentioned their hope that the data gathering process would be ongoing and sufficient to permit issuance of additional supplements, perhaps the absence of any further editions might have been owing to the lack of people’s understanding that they were even part of this colonial family. I’m sure my grandfather’s family had no idea of such a heritage. I’m sure if my grandmother had known, she would have made sure our family would have become part of the entries, just as she had done for corrections of the Broyles family genealogy.

In the end, while the supplement has provided me with fourteen hundred additional names of Tilson descendants—I am, after all, seeking news such as this to round out my database for DNA test results—it didn’t solve the tiny mysteries that had kept me running in research circles over the past few days. I still don’t have documentation—or even secondary reports—of just who Janet Tilson actually married. And I still don’t have any explanation for what became of her supposed son, Sampson Cole, or his unnamed twin sisters.

Maybe, at some point, I will find the answers to these puzzles. For now, seeing they are collateral lines that I was using to flush out details that were lacking on my direct line, I guess I’ll head back to the main trail from this rabbit trail and let this mini-adventure suffice me for the moment. I need to get back to my main goal of gleaning names of all descendants of my own direct line, to be applied to my DNA test pursuits. I still have genetic “matches” to match up with a paper trail. 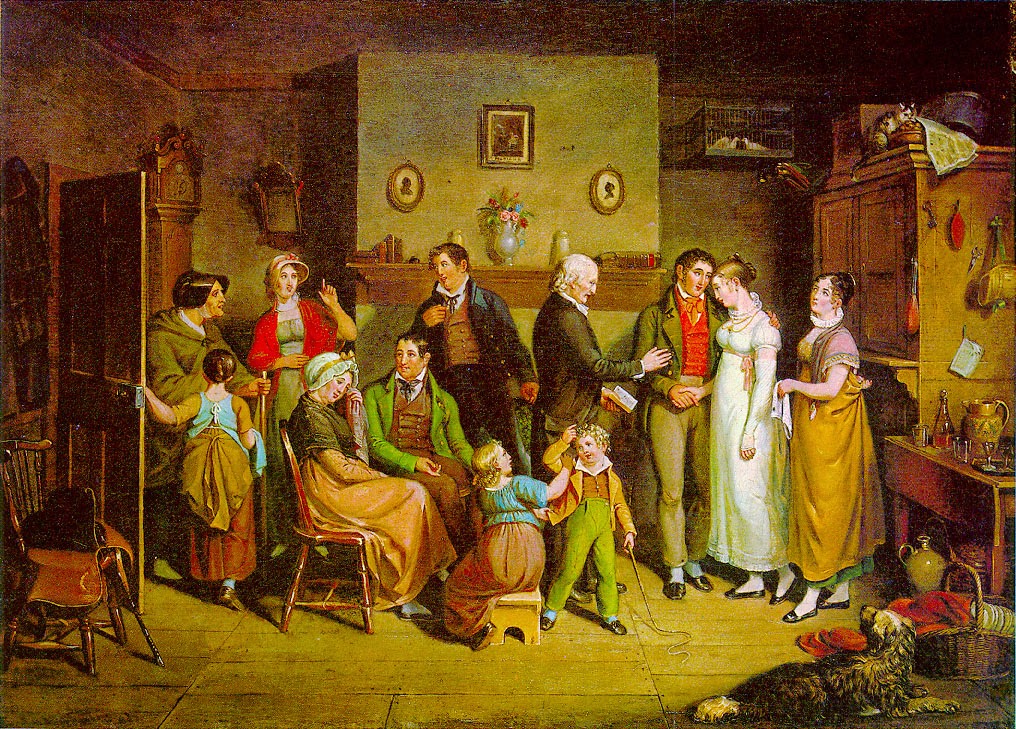 Above: "The Country Wedding," painting by John Lewis Krimmel, before 1820; courtesy Wikipedia; in the public domain.
© Copyright 2011 – 2022 by Jacqi Stevens at 2:51:00 AM
Email ThisBlogThis!Share to TwitterShare to FacebookShare to Pinterest
Labels: Books, Online Resources, Tilson