To Greasy Cove and Back Again

It seems a popular pastime, among family members, to name subsequent generations of new arrivals after members of the previous generation. Once again, I find myself attempting to disentangle my forebears from multiple generations of namesake ancestors. Perhaps, there is an as-yet-unpublished missing link to tie together the William Tilson and Joseph Cole I am seeking.

My original plan was to retrace the migratory steps of my fifth great grandfather, William Tilson, born in Plympton, Massachusetts, in 1741 to parents Stephen and Janet Murdock Tilson. Note with what particular care I identify that William Tilson. There is a reason for this: he is not the only William Tilson to occupy this Tilson genealogy. I’ve got to insure I’m discussing the right William.

According to various narratives, this particular William, though only thirteen years of age at the start of the French and Indian War, had served in that particular conflict. (Just for the record, apparently his service did not occur until closer to 1759, when he would have turned eighteen.) For his efforts, he was awarded—at least, according to one resource—a land grant in Washington County in the Commonwealth of Virginia, in 1763.

That explains the family’s move from Massachusetts to Virginia.

The land William received was located near a river called—depending on which narrative you glean this information from—the Holstien, Holstein, or Holston River. One book explained that the land was on the South Fork of the river. Another book insists it was on the middle fork. At any rate, it was called the Holston River, and the property was situated near what is now known as Chilhowie, Virginia.

The particular settlement was known as Saint Clair’s Bottom—although even with this designation, there have been variations in that reported name.

This William didn’t stay in Saint Clair’s Bottom long. Though all seven of his children listed in the 1911 Tilson genealogy were apparently born there, by the time the subsequent generation reached adulthood, they chose to continue the migratory pattern. Families of Washington County and Bristol, Virginia, 1776-1996, indicates that the three of William’s sons who moved on to Tennessee were Stephen, Peleg (my direct line), and William—hence, my need to keep my Williams straight.

In addition to the difficulties I face in keeping tabs on my William Tilsons, there is also another problem with most genealogical narratives of this family: the tendency to call the place where the family eventually settled, Unicoi County, Tennessee. While it is true that the Tilson sons moved to that area, during the time of their arrival—anywhere from 1799 to the first decade of the 1800s—there was no such designation. Unicoi County was not established until 1875.

Nor was the town known, at that point, as Erwin. That name wasn’t arrived at—even then, only by a mishap—until the 1879 designation as “Ervin” was mistakenly changed to Erwin and, eventually, made official with the town’s charter of incorporation in 1891.

William Tilson’s entry in Find A Grave has the details of his immigration closest to the correct designation when a volunteer there noted on the memorial:

[William] moved…to Saint Clair Virginia…then moved with some of his sons to Greasy Cove, Tennessee, about 1799. [He] moved back [approximately] 1825 to Saint Clair after [his] wife Mary died in Greasy Cove.

“Greasy Cove”—along with Unaka, Unika, and Longmire—had been an early designation of the town which eventually became Erwin, according to the town’s official website.

Finding William Tilson’s memorial at Find A Grave was helpful. Sure enough, he was buried in the same cemetery as his son in law, Joseph Cole, at the Saint Clair's Bottom Primitive Baptist Cemetery. The only disturbing thing about the entry was that the date of death did not match that given in the Mercer Tilson book. However, as the memorial notes, the markings on the headstone can no longer be read—even by someone as knowledgeable about the property as a historian who serves as a deacon of the church.

As for Joseph Cole—the one who married William’s youngest daughter, Janet—you can add him to those many generations who like to repeat the names of their ancestors. Though there are assertions that Joseph Cole not only married William Tilson’s daughter but that he also came into possession of William Tilson’s farm as well, I have yet to find the right Joseph Cole’s memorial at the same Saint Clair’s Bottom Primitive Baptist Cemetery where William was buried.

From Families of Washington County and Bristol Virginia:

Daughter Janet Tilson married Joseph Cole and lived near Love’s Mills five miles from William McKee’s property on the South Fork of the Holston River. This was the original William Tilson farm. They had twin daughters and a son named Sampson Cole…

William and Mary Tilson moved to [Tennessee] in their later years to be near their son[s]. Mary died during this period and is buried [there]. William then moved back to Washington County [Virginia], making his home with Janet and Joseph Cole on his original farm.

Try as I might, though, I could not match any available Find A Grave memorials for Joseph Cole with records I’ve gleaned from other resources. Perhaps it is because, out of over two hundred interments at that cemetery, only half have been photographed and entered on the website. I can find absolutely no entry for Joseph’s wife, William Tilson’s daughter, Janet. Nor can I locate a memorial that lines up with the details I have for their son, Sampson.

Perhaps, this is yet another matter of too many namesakes populating the generations. Clearly, I’ll need to set up a device to separate each of the Williams, Josephs, and even Sampsons from each other.

You know what that means. Time to get technical. This calls for some scorecards. 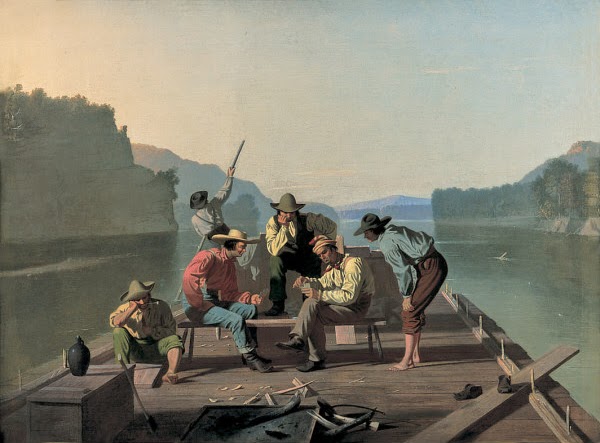 Above: Raftsmen Playing Cards, 1847 oil on canvas by George Caleb Bingham; courtesy Wikipedia; in the public domain.
© Copyright 2011 – 2022 by Jacqi Stevens at 2:46:00 AM
Email ThisBlogThis!Share to TwitterShare to FacebookShare to Pinterest
Labels: On the Move, Tennessee, Tilson, Virginia