If you are like me, there are times when you just want to curl up with a good book and get lost in the story. Sometimes those stories get so compelling, though, it’s hard to resist the temptation to take a peek ahead, just to see what’s going to happen. Whether whodunit, thriller, or the more tame varieties of novels—even a well-written biography—stories have this magnetic pull, drawing the reader to the back of the book.

Genealogy books, on the other hand, work in an entirely different direction. They are likely the only kind of book written in which the reader is sorely tempted to jump ahead to the beginning of the book. When I found the Tilson genealogy book, for instance, I began with the first listing of my immediate line that I could find from the index, landing me somewhere around page 167. That’s where my Davis family connects by marriage with the Tilson line.

Considering that is in a book boasting 609 pages, I was doing well. After all, my connection was six generations subsequent to the original immigrant Tilson’s arrival on colonial American soil. Rachel Tilson Davis, my third great grandmother, claimed designation 1393 out of a total 5524 numbered entries. And that was in a family tree extending only up to the year 1911.

I couldn’t resist; I peeked. I could see from the format that her line of ascent went from her father Peleg, to his father William, to Stephen, to Edmund, to Ephraim, to Edmond the immigrant. Curiosity got the best of me, and I wanted to know about this most distant of ancestors who managed to arrive on American soil in the 1600s.

So, I flipped to the front of the book and began reading. Truth be told, I skipped over the promised “brief sketches of the family in England back to 1066,” and zoomed in on the start of the genealogy. That didn’t begin until page thirty. But at least then, I could work my way forward and see how the original family began unfolding into the multiple generations that led toward the future.

Under the chapter heading, “First Generation,” I easily spotted Edmond’s son, Ephraim. The third child of Edmond and Joane Tilson, he was likely born in England before the family left for the New World. As the book began listing each of the children and their progeny, I paged forward to find that third child, Ephraim.

First listed was Edmond’s daughter, Mary, followed by the second child, Elizabeth. At the bottom of page thirty two, I finally spotted Ephraim, along with the details of his marriage to Elizabeth Hoskins and the listing of their six children. Edmund, my targeted ancestor, was Ephraim’s firstborn, listed as person number twenty eight.

You know that’s the next number I went flipping through the pages to find. Yep, I skipped all the history. All the land records. All the quotes from colony records where he was fined for “breaking the King’s peace.” And believe me—there was a lot of that history. I was still scanning through the narrative at page thirty six.

On the next page, the narrative ended. The numbering system started up again. I was finally going to be able to read up on my ancestor.

But wait! The bottom of the page started up with entry number thirty four. What happened to my guy, number twenty eight?

I flipped back and forth, trying—in all that text—to find the number I was missing, but all to no avail.

Finally, it dawned on me to look up to the top of the page to the numbers that really counted: the page numbers. There, I found the explanation to my difficulties: the book was missing two pages.

Of course, they had to be the very two pages upon which my seventh great grandfather’s information was recorded.

Where did those two pages go? I looked ahead—and back behind, as well—to see if it was just a fluke of the numbering system. Still, I knew that wasn’t the reason. The missing text made the jump between the pages too disjointed.

If this weren’t a digitized version of a public domain book freely accessible to anyone who cares to read it, I’d say I wanted my money back. But with the convenience and accessibility of online books—after all, you can’t beat the price!—comes a down side. When the imaging process misses a page—or two or three—the reader has no recourse but to go back and do what would have been done in the first place: go find another copy of the book.

If I’m fortunate, the Mercer Tilson book will have been digitized by another entity—perhaps a resource like the Hathi Trust. If not, I’ve already confirmed with WorldCat that I can access the “analog” version of the volume at a sort-of-nearby real brick and mortar library.

And where does that put me? Back where we used to be, doing research from real books in real libraries.

If only those libraries had cozy chairs to go with those books. 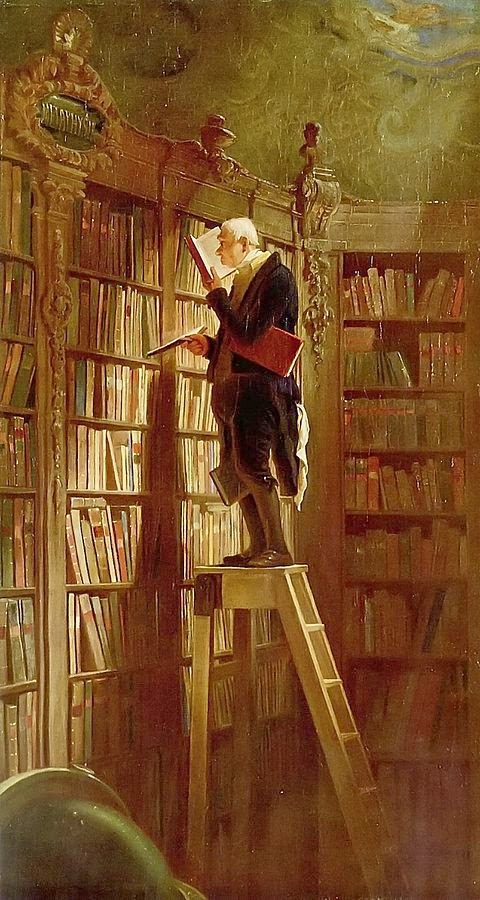 Above: "The Bookworm," oil on canvas by Carl Spitzweg, circa 1850; courtesy Wikipedia; in the public domain.
© Copyright 2011 – 2022 by Jacqi Stevens at 2:50:00 AM
Email ThisBlogThis!Share to TwitterShare to FacebookShare to Pinterest
Labels: Books, Online Resources, Tilson