The last week having felt like a time of trudging along in circles reminded me that statistics is my friend, and I need to do a little bit of statistical celebration again. So let’s take a tally of where we’ve been in the last two weeks and see if we can find any numbers to cheer us me up.

Last time I talked about numbers and research progress was exactly two weeks ago. In the meantime, I have indeed been busy, adding names to my database at Ancestry.com. When I started paying attention to progress, in this one particular family tree I’ve been focusing on, I had just under fourteen hundred individuals in my files. The next time I looked—nine days later—I had increased the count by over five hundred people. Now, two weeks later, the count has gone up to twenty four hundred people—one thousand more than when I started counting.

This included both direct line ancestors and their collateral lines, mainly because my goal in this is to make connections with all the DNA matches I’ve been garnering over at Family Tree DNA. I’m finding that the genetic genealogy side of the equation is insisting I’m related to way more people than I can locate on my family tree.

The numbers are rising on that count, as well. I am now up to 786 matches, with the most recent match having been added to my account just the other day, March 12. That’s up from 767 just two weeks ago, and 750 when I first started keeping track, nine days before that.

For the most part, those matches are in the frustrating ranges of “Fifth Cousin to Remote Cousin.” Many more people the “Third Cousin to Fifth Cousin” range, as well. So you see the need to be knowledgeable about all my fourth great grandparents and all the genealogical roads that lead to them. That means knowing what happened to all those siblings and their descendants, as well. Gotta have some way to make those connections!

I had neglected my routine of trying to contact two or three matches by email every day, so in the last two weeks, I tried to work that into my plan. Mostly, my emails went something like this: “Hi, I’m Jacqi, and you and I are matches at the v to w range at FTDNA. Let’s compare notes on our family trees; here’s the link to mine.”

Though I’ve had some encouraging responses in the past, these latest attempts have been rather disappointing.

One man put it bluntly: “Don’t see anything.” End of story.

Another match turned out to be a man whose relative talked him into testing—a relative who then didn’t seem too keen on pursuing the match any further.

One interesting connection was to a man for whom the match seemed to fall on his paternal side—a side he knew absolutely nothing about, because he knows nothing about his own father.  Almost as handicapped as an adoptee, his enthusiasm to discover anything more was hampered by his total lack of a paper trail.

A last contact—a woman managing the account for two relatives who tested and matched me—felt certain she could pinpoint our mutual match to a specific surname in her tree, a surname I can’t find anywhere in my tree.

And so it went, these past two weeks. I feel very much as if my task right now is to lay down the infrastructure of my future genetic genealogical endeavors. Having a family tree with both depth and breadth seems paramount. My genes may match someone else’s, but my paper trail is not yet sufficient to unlock the door to a documented connection.

Realistically, if you want to hit pay dirt with this DNA testing thing, you have to settle it in your own mind that you will be the one doing all the contacting. I’ve had virtually no matches initiate contact with me—a sobering realization, considering all the money people sink into such an effort as this.

Most of the connections I’ve made lately seem somewhat disappointing.

Every now and then, though, a rewarding discovery comes at the conclusion of communication with one of these distant cousins. That has shown me the power of this technology to indicate connections with distant ancestors via a process of what has been called triangulation. That has been what has encouraged me to pursue the Rainey line further in the case of my second great grandmother, orphaned before her marriage and brief years of motherhood. It may also help prove that some entries in tried-and-true published genealogies of a century ago included mistaken reports which pointed to the wrong individuals in my own lineage.

All these people, for the record, match on my mother’s side of my family. All those Taliaferros and Davises and related lines I’ve been laboring over belong to my maternal line. These are also the ones who lead me back to Patriot ancestors and eligibility in lineage societies like Daughters of the American Revolution and, yes, now even The Mayflower Society.

Having gone over some of these hundred year old genealogy books with a magnifying glass has helped me uncover discrepancies, warts and all. The tedium will be worth it, if I can set the record straight. After all, I can’t be the only one consulting these publications. There may be literally thousands of people alive now who can claim those Mayflower passengers as ancestors. While it may disappoint some, it will certainly be helpful to others to discover the correct line of descent for those legendary people from our nation’s history. 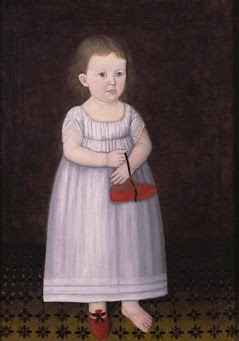 Above: "One Shoe Off," 1807 painting by New England itinerant deaf painter, John Brewster, Jr.; courtesy Wikipedia; in the public domain.
© Copyright 2011 – 2022 by Jacqi Stevens at 2:52:00 AM
Email ThisBlogThis!Share to TwitterShare to FacebookShare to Pinterest
Labels: DNA Testing