Refocusing on Square One

The truth is, I’ve been running away from reality. And the reality is that I’m not finding what I’m looking for.

Sometimes, it’s just easier to keep looking—looking for anything, as long as it keeps yielding discoveries. Sometimes, getting more genealogical goodies feels like progress, even if it isn’t the stuff I need to be finding.

If you haven’t noticed, it’s been almost a month since I was last back on track with my stated purpose. Oh, granted, finding the how and why of my connection to the Mayflower has been a blast. But it wasn’t in my original game plan.

I still need to break through the brick wall of discovering which family my orphaned second great grandmother belonged to. And, if I was right about my original guess of Mary Rainey Broyles’ mother being Mary Elizabeth Taliaferro Rainey, then who were her parents? The genealogy books covering that line in that era, in my estimation, have got it all wrong—but where is my proof that I’m any closer to the truth?

So, I dither around with finding “clues” to plug into other family members’ trees and fool myself into thinking I’m making progress. I may be gathering a larger count of individuals in my tree, but I’m still missing the mark.

Remember, it’s all in seeking a connection between my matrilineal line and that of the mystery adoptee who, one day several months ago now, showed up on my digital front door, announcing that our DNA tests showed an exact match we share.

Even where I’ve been stuck for the last month—wondering about third great grandmother, Mary Elizabeth Taliaferro Rainey—I can’t gain any traction. Not even with the four other Rainey daughters whose potential descendants could also trace a line that would lead to exact matches, if I could ever convince one of their descendants to agree to mitochondrial DNA testing.

If. Of course, that “if” won’t happen any time soon, because I can’t even determine what became of three of those siblings of my second great grandmother.

Don’t get your hopes up on the fourth of the sisters—I already know she died unmarried before 1851.

However, if I can, somehow, find the “happily ever after” for what must likely be the married version of sisters Martha, Sarah, and Mildred Rainey—and if any of them had daughters who had daughters—then perhaps I’ll find a way to see how close a match we might have to our mystery cousin. 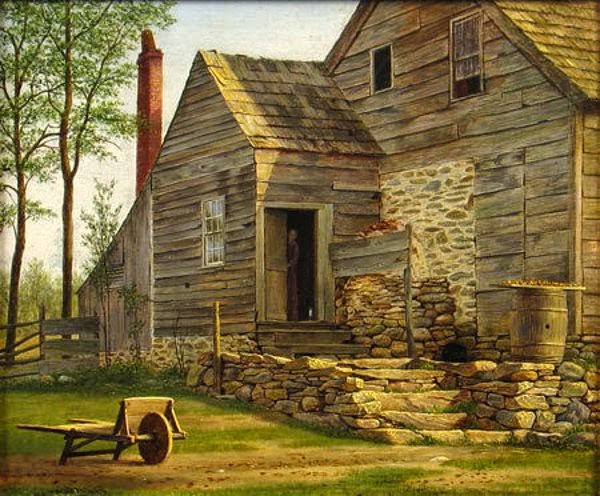 Above: Long Island, New York, artist William Moore Davis (1829-1920), The Lady Behind the Door; courtesy Wikipedia; in the public domain.
© Copyright 2011 – 2022 by Jacqi Stevens at 2:46:00 AM
Email ThisBlogThis!Share to TwitterShare to FacebookShare to Pinterest
Labels: DNA Testing, Rainey, Taliaferro