Dirt Farmers Have Roots, Too

You might think, after having gone on a whirlwind tour of the generations of my Taliaferro ancestors, that you could never find such stories about your ancestors because they were, well, unremarkable. Perhaps you’ve been trudging back through the ages, tracing your folks through thick and thin of census records, marriage licenses, death certificates and maybe even family Bible entries, never stumbling across anything more significant than names, dates and places.

Resist the temptation to think these were “nobodies” of no interest at all. Let me tell you what I found, yesterday, about some nobodies in my own family.

As deeply engrained as DNA runs through a family’s generations, you can still take a look at your grandparents and guess which side of the pair won on the environmental influence side of the nature versus nurture argument.

In my mother’s case, I think it was her mother over her father. In my childhood, I heard a lot of stories about family, but most of the interesting stuff seemed to come from her maternal side of the family. That’s the side where the Taliaferros come in.

When she spoke about the other side of the family, it had this certain attitude. Where did that come from? Was my mother mimicking what she heard as a child, herself? In the midst of those infrequent recollections of the other side of that family, I could almost catch a phantom micro-expression lift the corner of her thin upper lip into a sneer before escaping notice. I was certain I was hearing the voice of her mother, though it was my own mother doing the speaking.

What was wrong with that family? Why did my grandmother look down upon them? They were poor. They were uneducated. They were simple. They were hopelessly doomed to never amount to anything—even though they were hard-working.

Of course, these are all things that a young woman never considers, when she gets swept off her feet by Mr. Tall-Dark-And-Handsome. These things come later.

Fast-forward another generation, and that leaves you with me, researching everyone else’s family line but my own—and even of that collection, you notice the priority is given to the maternal side of the deal, where we can ooh and ahh at all the accomplishments of Taliaferros and company. That DNA runs deep, indeed.

Yesterday, it occurred to me—since I haven’t been making any progress in identifying common ancestors to connect me with my DNA test matches—that perhaps I should take a look at that neglected side of my family tree. Yes, that’s right, my mother’s paternal side from the much maligned hills of Tennessee.

So, I pulled out my database and turned to the Davises. I moved from my grandfather to his father, Will, to his father, Thomas D. Davis. Though the man was born in 1828, he was still there in Washington County in the hills of Tennessee. Though his father, James, was born in 1795, the location listed for his arrival was North Carolina, not Tennessee—but if you look closely at Tennessee state history, the very midst of the territory in which James lived was the center of the short-lived state of Franklin. Likely, James’ birth in “North Carolina” was in the exact same place where he later was said to have lived in “Tennessee.”

What, then? Enter a wife for James Davis by name, Rachel Tilson. Seeing that, I remembered there was something about that Tilson surname. A long time ago, I had taken a sneak peak at some other family trees circulating online, and had gotten the idea that this might lead to something.

So, I googled “Tilson Genealogy” to see what I could find.

Right, wrong, or indifferent, it was a book of Tilson genealogies compiled by Mercer V. Tilson in 1911. While it wasn’t lost on me, in that Google search, that others have commented on inaccuracies in the text, I decided to take a serious look. I found a copy of the public domain text at Archive.org, and began reading.

By the time I came up for air, I had made my way back through six generations preceding James Davis’ wife, Rachel Tilson. I had gone from her father Peleg, to William, to Stephen, to Edmund, to Ephraim, to Edmond in Plymouth, Massachusetts, in the early 1600s.

Back in Tennessee, in the early 1900s, there they were: the descendants of the many Tilson family members who, along with the families of those they married, had lived in this humble area for a century. Quietly unassuming, they farmed their land—a challenge, likely, in hills such as those—and tried as best they could to make ends meet. They weren’t lawyers or judges or wealthy merchants or politicians. They were just farmers, living the plain life.

I once remember hearing the expression, “dirt farmers.” I don’t know who first said it, but when I heard it, though I didn’t know what it meant, I heard it coming at me with that same tone of voice my mother used when talking about her paternal side of the family. Likely, it was the same tone of voice her mother had used, before her. And that tone spoke louder than the words—giving the little child that I was the idea of what it must have meant.

After all, “Doesn’t everyone farm in the dirt?” I thought. Could this be like “dirt poor”? Oh, what a child’s mind can do with inferences. What that’s cost me, after all these years, is a rhetoric that left some of my ancestors in the dust.

It’s time to go back and follow the trail for myself. Sometimes, those unassuming, poor—yet self sufficient—farmers are the ones with the most significant stash of heritage. They just never had time to go out and brag about it.

They were too busy farming. 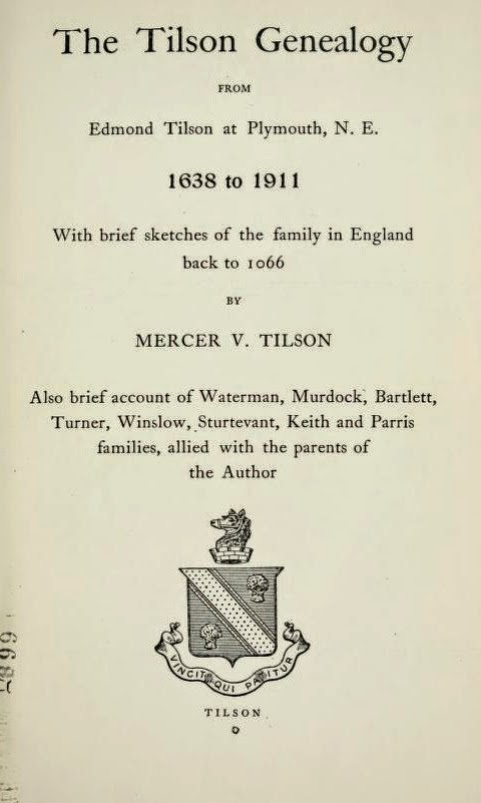 © Copyright 2011 – 2022 by Jacqi Stevens at 2:50:00 AM
Email ThisBlogThis!Share to TwitterShare to FacebookShare to Pinterest
Labels: Books, Davis, Tennessee, Tilson