Families may have intended to name children after relatives from the preceding generation as a gesture of honor—but for those of us following after them, it makes the research trail more difficult.

I’m still mired in the research mess of several people named Joseph Cole, coupled with several named Sampson Cole, who don’t seem to be related to the people indicated in published genealogies. Try as I might to find a connecting relative whose identity in the mix can affirm for me that I have the right individual, the more I look, the more lost I get.

It occurred to me last night that perhaps looking to Janet Tilson Cole, rather than her husband or son, I could find some helpful information. After all, think about it: the reason William Tilson’s youngest daughter received the name Janet was likely owing to a namesake, herself.

William Tilson, born in 1741, was the soldier whose service during the French and Indian War had garnered him a piece of land in the outback of the colony of Virginia. Moving to Saint Clair—a settlement in what was then Washington County—he and his wife, Mary Ransom of Plympton, Massachusetts, had raised seven children. Janet, born in 1776, was the youngest of those seven.

Janet Tilson was the one who later married a man by the name of Joseph Cole—the very one whose identity I’ve been trying to ascertain through documentation. And yet, I can’t seem to find any record of her name—nor any Joseph Cole whose records link him to a wife by that name.

Let’s think about this Janet Tilson for a moment. Janet, herself, was named after someone: her father William’s mother, Janet Murdock Tilson. The older Janet is one for whom I’ve seen some records giving the spelling as Jennet. Could the same hold true for the younger Janet? And could it be possible, in that time frame, that some might have shortened that given name of Jennet to Jennie?

It just so happens that, though I’ve tried and failed at locating any marriage record for Joseph Cole and Janet Tilson, I did happen upon a report of a marriage record for a Joseph Cole and Jennie Tilson. It wasn’t, however, an original document that provided the information, but an index: Washington County Marriage Register, 1782-1820, originally published as Volume 34 of Beverley Fleet’s Virginia Colonial Abstracts.

Digitized and available on Ancestry.com (with my apologies to those non-subscribers who cannot follow the the above hyperlinked referrals), the abstract indicates the marriage of one Joseph Cole to a Jenny Tilson on December 27, 1799. If we can buy the plausibility of a Jennie coming from Jennet, a.k.a. Janet, then this will be a keeper.

It is interesting to note, as well, that the very line preceding Joseph’s happened to be for the marriage, exactly one year earlier—or could that have been a typo?—for a Hugh Cole. Hugh happens to be a name that I’ve seen appearing with mentions of Joseph Cole; perhaps they were brothers. Whoever they were, both Hugh and Joseph had the same officiant for their respective weddings. This may not seem like much, but it does give me hope that in the other places where I’ve seen Hugh’s name mentioned, the Joseph that follows suit is for the same man as the one who married our Janet.

Though those named-after relatives in this family have, so far, seemed to lead me astray, I keep hoping that, if I follow the trail of yet another clue-laden possibility, it will lead me to convincing evidence that I have the right people. Let’s hope Hugh yields us that clue. 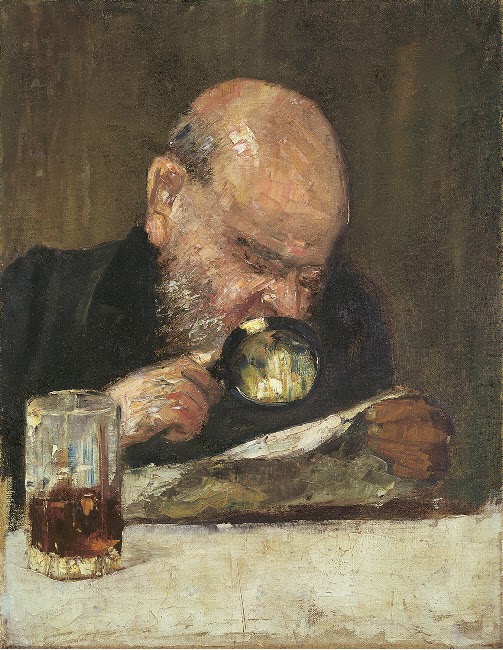 Above: "Reader With Magnifying Glass," 1895 oil on canvas by Lesser Ury; courtesy Wikipedia; in the public domain.
© Copyright 2011 – 2022 by Jacqi Stevens at 2:48:00 AM
Email ThisBlogThis!Share to TwitterShare to FacebookShare to Pinterest
Labels: Tilson, Virginia