The Grim Reaper and His Methods

Two days after The Fort Wayne Journal-Gazette announced the change of venue for Mary Kelly Phillips’ lawsuit against her deceased husband’s employer, an interesting editorial piece ran in The Fort Wayne Sentinel.

Carrying the curious title, “The Grim Reaper in Fort Wayne and His Methods,” the article was tucked away on page nine of the March 22, 1913, paper.

The composition was a litany of the misfortunes befalling Fort Wayne residents who had recently met an abrupt end by unusual means.

As you can imagine, the late Patrick Phillips made the list.

...Patrick Phillips met death by being struck by a Nickel Plate railroad train.

Whether the Sentinel had failed to read the memo on any gag order, I do not know. Theirs, however, was the one mention post change of venue—albeit complete with requisite editorial error—of anything related to Patrick’s death that I could find in any Fort Wayne newspaper subsequent to the announcement that his widow had filed suit in Allen County. That is, of course, until report of the final decision on the case.

On the other hand, apparently, those names mentioned simply in the initiating “Courthouse News” announcement as “Frederick A. Delano and E. B. Pryor, receivers for the Wabash company” represented men of quite a bit more stature than I had originally imagined. Thanks to a comment from reader “Intense Guy” yesterday, I thought it might be instructive to take a second look at who the opposing players might have been.

Perhaps the name “Delano” may have struck a chord with you. Somehow, I missed the connection. And yes, there was one. Since we are all aficionados of genealogy, let me take you on a brief family history tour. 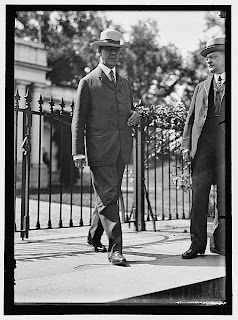 Frederic Adrian Delano was born in Hong Kong in 1863. His parents were Warren Delano, Jr., and the former Catherine Robbins Lyman. While I won’t go into the details of the entire Delano family constellation, I do want to mention that Frederic had a sister, Sara Ann Delano. This sister, though still in her late twenties when she married a widower, ended up having only one child.

As you have no doubt by now realized, that child was Franklin Delano Roosevelt.

Are you beginning to see some connections? This guy didn’t make president of a railroad company for nothing. His was not the pull-yourself-up-by-your-own-bootstraps stuff of beloved Middle America legend. By the time he was born, he had already arrived.

As for the mysterious E. B. Pryor, his fashionable initials may have granted him a cloak of invisibility. While uncovered in some online searches precisely as the Journal-Gazette tagged him, I have yet to find his true identity. No doubt, he had some connections of his own to augment the business intents of his colleague.

It wasn’t until the silence was broken on the verge of the court’s decision in Mary Phillips’ case that any other newspaper mentions of the incident or its prosecution could be found. Granted, there are still several holes in digitized newspaper collections—and, given the current inept state of optical character recognition technology, some mentions may entirely have been bypassed by search engines—but I find it of singular curiosity that not much was published that could have been taken as a situation for which such a change of venue might be requested.

Publicity? Not much that I could find.
Pathos? Small town gossip can do wonders for support of underdogs.

Whatever the vector was that spread such sentiments, some very important people had enough business sense to check which way that wind was blowing—and head in the opposite direction.


Photograph, above left: Frederic Adrian Delano, left, with Charles S. Hamlin, circa 1917, from the Harris & Ewing, Photographer, collection at the Library of Congress; in the public domain.