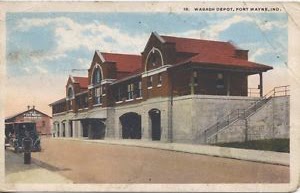 If you think following family trees can be a challenge, just wait ’til you see the diagram of Wabash Railroad-related mergers in the late 1800s and early 1900s. Now, that’s challenging.

Before moving onward to see what decision was reached in Mary Kelly Phillips’ case against the Wabash Railroad, let’s consider that organization’s financial condition at the time Mary filed her 1913 suit in Allen County, Indiana.

Recall, if you will, her claim of wrongful death for her husband, Patrick Phillips, at the hands of his employer, the Wabash Railroad. The lawsuit was actually filed against “Frederick A. Delano and E. B. Pryor, receivers for the Wabash company.”

We’ve already taken a peek at just who Frederic Adrian Delano was. Now, courtesy of some details discovered by reader “Intense Guy” yesterday, we find that “E. B. Pryor” was most likely Edward Bailey Pryor—who did, incidentally, raise himself up from his bootstraps, entering service with the Wabash as a clerk in the auditor’s office, and finishing with a flourish as assistant to the president, before moving on to become a director with the State National Bank.

What Mr. Pryor did in the interim, after his service as assistant to Wabash’s president and before becoming president of the State National Bank, himself, is the span of time that best suits our purposes now in the saga of Patrick and Mary Phillips. It all goes back to that one phrase inserted with the details about the two gentlemen named as defendants in Mary Kelly Phillips’ case: “receivers.”

Apparently, the Wabash Railroad Company, incorporated in several Midwestern states in 1889, had entered receivership on December 26, 1911. Though this might be telling in that companies in the throes of financial woes may tend to cut corners that end up being short-sighted in the long run, only an examination of court reports could tell me that, now.

But we can guess, can’t we? I can’t help but wonder such things whenever I hear tales of cutbacks that press each of the remaining employees to the threshold of error or negligence.

There were certainly fingerprints of such financial woes showing in other newspaper reports. A May 21, 1914, Fort Wayne Journal-Gazette article mentioned the arrangement of a special session of Federal Court to be held in Fort Wayne, in which of five cases against railroad companies, two concerned the Wabash Railroad. Though the settlements in those two cases, as reported in the June 10, 1914, Fort Wayne Sentinel, didn’t approach the amount sought by widow Mary Phillips, the report clues us in to the fact that she was not alone in her decision to seek redress.

Not only in lawsuits brought by widows, but in other business dealings, the Wabash Railroad continued to run from its creditors. With a new railroad depot just completed in Fort Wayne, unpaid contractors sought to foreclose on construction liens. A question of the company’s ability to pay was posed that same month by The Fort Wayne Daily News’ editorial headline on June fifth, “Suppose They Do Not Pay? Will the Creditors Sell the New Wabash Depot?”

...The Fort Wayne Builders’ Supply company this afternoon filed two suits against the receivers of the Wabash Railroad company, both complaints being to foreclose liens. The demand on one was $725 and on the other $900. Attorneys’ fees are asked in addition to the sums named. The complaints ask for an order of sale to be granted the plaintiffs.
The liens are on the new Wabash depot here, and the question is what will happen if the plaintiffs are given the judgments they ask and the receivers do not pay. Will the plaintiffs sell the depot, and if so, who will want it and for what? These questions caused considerable comment in the office of Clerk Gerding when the complaints were filed.

Financial woes such as these make me wonder: even if Mary Phillips were awarded the sum she sought, would she be able to wrest it from the company? Even if the Wabash Railroad were the “Big Business” opponent portrayed in this little family history drama, with multiplied solvency issues, their giant adversarial image might turn out to be little more than a mirage.


Postcard, above right: the Wabash Railroad depot in Fort Wayne, circa 1920; in the public domain.
© Copyright 2011 – 2022 by Jacqi Stevens at 2:48:00 AM
Email ThisBlogThis!Share to TwitterShare to FacebookShare to Pinterest
Labels: Court Proceedings, Fort Wayne, Kelly, Newspaper Clippings, Phillips