Waiting For That Ship That Came In

I’ll just say it up front: I can’t wait to find that ship that came in. Remember my inner-child genealogist? It’s still jumping up and down on the bed, eager to see what comes next.

So far, we have John Kelly supposedly filing his Declaration of Intent in Allen County, Indiana, on October 5, 1868. Amidst the details he had to provide was the date of his ship’s arrival in New York City. According to John Kelly, that would have been on August 16, 1867.

Luckily for us, the CastleGarden.org project helps us cut immediately to the chase with its online search capabilities. Even better, we can resort to computer guru Steve Morse's One-Step website and zero in on our target.

It doesn’t take long, entering our search terms, to pull up results. As might be suspected for a name as common as John Kelly, there are a lot of results to sift through, even if we limit the date range to our known parameters.

Thankfully, we have another handle to grab those results by: the field indicating age of immigrant. Remember, our John Kelly was not the typical young, single Irish man traveling to America in search of a job. A more unlikely prospect for this sort of journey, our John Kelly was, at the very least, in his fifties and a family man. Most likely, he had in tow his wife Johanna, his seven year old son Timothy, his five year old daughter Catherine, and his newest arrival, the infant Mary.

Looking at the search results coming back after my query, though, I begin to wilt. There is no ship with such an arrival date which includes any passenger by the name of John Kelly. How can that be? Did bureaucracy let me down?

Don’t choke on that thought.

Think, for a moment, about your last vacation. Even better, think about your most fabulous, memorable trip ever taken.

Now: give me the exact date and time when your boat, plane or train arrived at your destination.

So perhaps—just perhaps—old John had some memory issues with that question, himself. At least we can hope.

Undaunted, I took up the search for any John Kelly who was at least fifty years of age, traveling from Ireland—or at least on a ship originating in Liverpool (some of which also made secondary stops in Queenstown or other Irish ports)—and arriving in New York between the years of our strict parameters. After all, if we are not certain about anything else in this scenario, we can be fairly certain that John’s wife gave birth to Mary Kelly in Ireland in 1867, and to Patrick Kelly in Indiana in 1869. Not only that, but we have to keep in mind the potential Declaration of Intent found in Allen County for our John Kelly indicated an arrival in 1867.

Eliminating the ones that didn’t seem to be promising candidates, here’s what I came up with:

Unfortunately, neither the Castle Garden website itself nor the One Step site included the option to search for family groupings on one ship. That meant step two would be to complete this same search for the others in John Kelly’s family, to see if there were any matches to the data uncovered for the possible entries for John, himself. 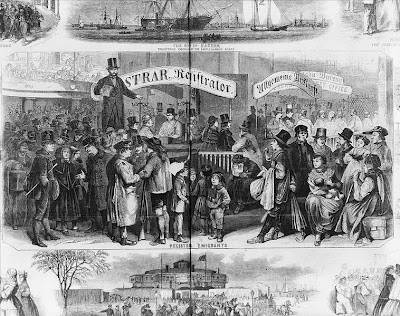