Getting Lost in a Field of Children 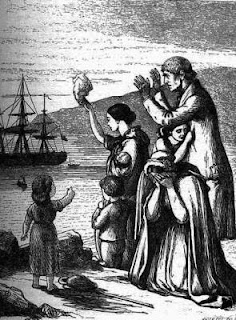 Finding John Kelly and his immigrant Irish family—even within a narrowed, two-year range—seems to be a process that is bogging down. I keep reminding myself that genealogy researchers now have it so much better than in the previous century. We don’t have to spend hours slogging through endless reels of microfilm, scanning through a never-ending parade of names that aren’t our names. With a click of a mouse, we enter our terms, check our parameters and voilà! We get…well, we get pages and pages of entries with the exact same name: John Kelly.

Oh, if only his parents had named him Thaddeus. That middle initial needs to pull its weight in differentiating him from the hundreds of other escaping Irishmen, hoping for a better life in a new land.

After finding ships’ passenger lists on the Castle Garden website including a viable candidate for our John Kelly, apparently, the next step in my search was to seek any matching records for the rest of his family—presuming, of course, that the entire family unit traveled together. Admittedly, that was not always the case. Often, immigrants to North America followed a pattern in which the head of household would first make the trip, scout out the possibilities, find a job and begin earning money to send home. Ultimately, the goal would be to bring the rest of the family over, too.

Ireland, however, sometimes saw a different immigration pattern: young, single people—both men and women—leaving a homeland where there was no hope of bettering themselves. While those young immigrants eventually ended up marrying others of Irish birth, their marriages took place after arriving in their new homeland.

John T. Kelly, however, already didn’t match that typical Irish pattern. He was far from being young. In fact, his age makes me wonder if he hadn’t decided to leave, owing to possible loss of older children in the hardships of his forsaken homeland.

Partially because of pre-established connections in Fort Wayne, Indiana—remember, his mystery associate, Timothy Kelly, was already working for the “Pennsylvania shop” in Fort Wayne—I think John and family headed straight from New York to Indiana. The entire family unit appeared in Fort Wayne in time for the 1870 census there—although, admittedly, finding them was difficult, as the age given for both husband and wife was the same, if  the faded document can even be deciphered correctly.

Even so, a lot can happen in three years time. There is no documentation I can find that would solidly give me confirmation in my imagined scenario that the family traveled together.

But when I move to online resources to try and find a matching family grouping, the search seems even more hopeless.

Let me take you through the paces.

While the first logical step would be to look for John’s wife in the Castle Garden immigrant records, because of the many spelling variations—both to given and surname—I opted to begin my search with the children. Besides, there were many women traveling who were in the age range Johanna might have been.

But with the children, too, I ran into problems. Take a look at the results for oldest child, Timothy, for instance. I find an entry for a seven year old Timothy arriving in New York City on August 20, 1868, on the Denmark. Admittedly, that is a few days and one year off from the date his father gave on the Declaration of Intent in Fort Wayne. However, it appears that there was also a Johanna Kelly traveling on that same ship.

Don’t get too excited about that fact, though. This Johanna gave an age somewhat less than what I calculated for our Johanna. And she was traveling as a “servant to a gentleman”—somewhat unlikely for a mother of three children, including an infant.

Speaking of infants, I then thought perhaps it would be easier to spot a baby on the passenger list—with age given as “U” in this program. Despite the fact that the infant’s name was the all-too-common Mary Kelly, I checked it out. I did find one likely prospect, departing from the Queenstown port in Ireland, but the arrival for this Mary Kelly on the Pennsylvania was on July 11, 1867—hardly a match for any entries I’d found for her father so far. Another infant Mary—on the same ship, even—didn’t look likely. That Mary originated in Liverpool and had a different arrival date.

Well, was there a match between Mary and any Catherines I could find? Hardly.

John’s daughter Catherine, by 1867, would have been about five years of age. Two entries met that specification. One, traveling on the Louisiana, arrived from Liverpool on June 17, 1867. The other, on the Nebraska, completed the trip from Queenstown on June 21, 1867. No listings for a five year old Catherine appeared on Mary’s Pennsylvania.

Somewhat dismayed that I wasn’t able to cobble together a travel itinerary that included all five people—John, Johanna, Timothy, Catherine and Mary—I was about to give up on the prospect. After all, with all the data constantly being added to online sites now, it is sometimes only a matter of a waiting game before the documents we seek are uploaded to a collection.

There was, however, another possibility for searching. While I already had spotted the possibility, I hadn’t yet toyed with it.

That was the One-Step program’s finding aids for zeroing in on the right microfilm reel to inspect. While I might not escape slogging through those microfilms, at least I’d have some guidance in selecting just the perfect candidate for my return to prehistoric-age research.
© Copyright 2011 – 2022 by Jacqi Stevens at 2:52:00 AM
Email ThisBlogThis!Share to TwitterShare to FacebookShare to Pinterest
Labels: Fort Wayne, Immigration, Ireland, Kelly, On the Move, Online Resources