A Season for Marriages

Perhaps the peal of wedding bells lingered in the air a bit longer for Mary Kelly’s brother Patrick after Mary exchanged her vows with another Patrick—the Patrick Phillips who became her husband on May 23, 1900—for it was two weeks to the day when her brother followed suit and became a married man, too.

Mary’s brother Patrick chose as his wife a woman from Logansport, a small Indiana town seventy five miles distant from his native Fort Wayne. On June 5, 1900, the prospective couple appeared before the clerk of the Allen County Circuit Court to obtain license to be married—which event occurred the very next day.

Other than my research for our direct line’s Catherine Kelly—Patrick’s other sister who married my husband’s great-grandfather John Kelly Stevens—Patrick’s line was one of the first of the Kelly line that I successfully pursued during visits to Fort Wayne years ago. I felt pretty good about locating Patrick’s marriage license as quickly as I did—and uncovering the maiden name of his bride.

Patrick’s intended was named Emma W. Brown. Not that I groaned upon discovering that I would now have to delve into researching a surname as common as Brown—a fate almost as bad as researching Smith—but I soon discovered there might be some problems with what had initially seemed such an easy discovery.

Of course, I still had to keep in mind the possibility that listings for this family could be spelled either Kelly or Kelley. Everything had to be doubly-checked, using each of the two spellings, to make sure I wasn’t missing anything.

Then, of course, I had to tap dance around the usual reporting errors. Were Patrick and Emma married “this evening,” as The Fort Wayne News had it on June 6, 1900; married “this morning,” as The Fort Wayne Evening Sentinel insisted; or married “Eearly last Wednesday morning,” as the Weekly Sentinel recapped it on June 13, 1900 (and yes, you read correctly: “Eearly,” as in veery early at 6:30).

I suppose you could attribute such focus on little details to my propensity to poke fun at journalistic mistakes. But it’s the other mistakes I found that cause me to lose confidence in such reports. Take the details on the wedding attendants. Were the maid of honor and best man really “Miss May Reseberger and Edward Ryan,” as both versions of the Sentinel had it? Or should I prefer this version, found in the June 6 News:

The marriage of Miss Emma Brown to Mr. Patrick Kelly will be solemnized this evening at 6:30 at St. Patrick's church, the Rev. Father Delaney performing the ceremony. The attendants will be Miss Kaher, of Logansport, sister of the bride, and Mr. John Ryan. The bride and groom will go to housekeeping at 60 Williams street.

More to the point, if this version of the story was the one that was correct, how is it that Miss Kaher was sister to Miss Emma Brown? 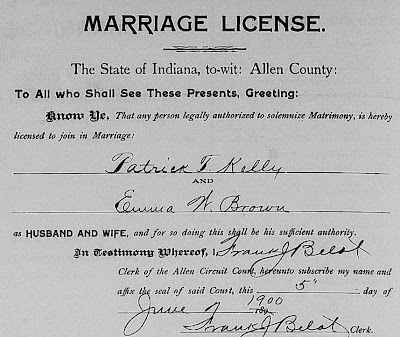