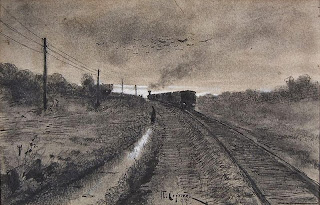 What’s a widow to do when she’s left, on account of the workplace death of her husband, to feed and raise four young daughters by herself?

The date is May 18, 1912. The place is Fort Wayne, Indiana. Just-widowed Mary Kelly Phillips is out shopping for a new way to provide for her family.

Her options present a bleak picture: though according to the 1920 census, she could read and write, there is little information to tell us how much education Mary had received in her younger years. Married in 1900—the couple was now five days shy of their twelfth wedding anniversary—she had spent the last twelve years being a housewife and mom to four young daughters. Further, indications from city directory records show that, of the few women who did work outside the home, their “career” options in that era were limited.

Though we now are accustomed to life in a lawsuit-happy culture, I don’t know how prevalent that option—or even knowledge of it—was, back in 1912. Certainly, in the case of Patrick’s untimely death, there were many questions to be answered. I get the sense of it that there weren’t many people out there, back then, willing to ask those questions.

I’ve yet to explore how widespread such attempts at litigation were to hold Big Railroads’ feet to the fire, as far as demands for corporate responsibility were concerned. As we will see in a few days, Patrick’s death was not a rare occurrence in that line of work.

Initially, my main interest in locating newspaper reports about Patrick and Mary Phillips was to discover details about their lives. How unexpected a find this saga was to me, when I first began exploring the holdings at the Genealogy Center in Fort Wayne years ago. As the story unfolded—from first finding records of the wedding announcement for Patrick and Mary to news of his violent death to reports of her decision to stand up to big business with a lawsuit demanding $10,000 in damages—I’ve learned that researching family history is so much more than just knowing your own family’s story. You have to know the story of the times in which they lived.

Finding the page ten entry in the column “Courthouse News” in the February 17, 1913, Fort Wayne Daily News certainly piqued my curiosity about the realities surrounding that seemingly harmless ditty we all sang as children: “I’ve been working on the railroad.” It certainly wasn’t anything like the song made it seem.

Mary Phillips has brought suit against Frederick A. Delano and E. B. Pryor, receivers for the Wabash company, to recover $10,000 damages for the death of her husband, Patrick Phillips. She alleged negligence on the part of the defendants. Breen & Morris are attorneys for the plaintiff.
Patrick Phillips was a switchman and extra conductor for the Wabash company. On the night of May 18, 1912, he was ordered to make up a train and was engaged in doing so when the accident which caused his death occurred. The plaintiff alleges that Patrick Phillips went to a switch to throw it, but owing to the fact that there was no light on the switch and none in the vicinity he could not see clearly where he was going. A car door and other rubbish were thrown about and the ground about the switch freshly dug up, the plaintiff claims, and the victim of the accident stumbled over something and fell under the wheels of a moving freight train. He was crushed, death coming instantly. The plaintiff is suing on behalf of the estate of Patrick Phillips, of which she is administratrix. Besides the widow, there are four children, the oldest being eleven years of age.