In the Monday morning edition of The Fort Wayne Daily News on February 17, 1913, the “Courthouse News” column had carried the report that widow Mary Phillips was standing up to Big Railroads by filing suit for damages in the death of her husband, Patrick.

Barely a month later, a second report—this one in The Fort Wayne Journal-Gazette on March 20—announced a change in plans:

The case of Mary Phillips, administratrix for the estate of Patrick Phillips, vs. the Wabash Railroad company receivers, was sent to the Wells county on a change of venue from the circuit court.

Why a change of venue?

I’m not asking that question for academic reasons. I think it’s fairly common knowledge that, often, a change of venue will be requested in high-profile cases when a move away from the location of the incident is needed. This is likely to happen in cases requiring jury trials, in which widespread publicity about the incident or its players precludes a fair and impartial selection of jurors.

I’m questioning the change of venue because I’m trying to read between the lines in the few bits of information I’ve been able to glean about how Patrick Phillips’ death affected the community in which he worked and lived.

I’m also speculating on the possibility of posturing on the part of the defendants. After all, the county seat for Wells County—Bluffton, the site to which the proceedings were moved—is twenty five miles distance from Mary’s home in Fort Wayne. Just how was she—the now-destitute widow—to attend the sessions concerning her complaint? By rail? If that mode of transportation were available to her, I hardly think that would put her in a comfortable position—not to mention the cost incurred. The defendants, on the other hand, would likely not feel the impact of such cost as much.

Then, too, why move the case? I'm tempted to finger the press in spreading reports which might slant the case in Mary’s favor. After all, she—on behalf of her deceased husband—was the underdog in this case. That always makes for a good story—at least something to sell a few more copies of the latest edition.

And yet, I find very few newspaper reports about the incident besides the one that ran just after the change of venue was announced. If anything—or anyone—was spreading the word about Patrick's death, it must have been an invisible network of communication.

I’m guessing it was good old fashioned gossip that caused those railroad execs to request the change of venue.

It’s the reasons for the gossip that make me want to read between the lines. It’s there that I see a widespread support forming for Mary and her case. Think of it: Patrick had been employed by two different rail companies, so he was widely known. Then, too, there were organizations of railroad workers forming—still trying to find their voice, perhaps, but concerned over the egregious fallout from the “progress” of railroad expansion. In addition, there was the Church community—whose ties were further solidified through the extended family links and immigration trials of the newcomer Irish of the previous generation—that strengthened that solidarity.

For whatever reason the change of venue was requested on Mary Phillips’ case, I see it as indication of widespread support for the plight of this one particular widow. 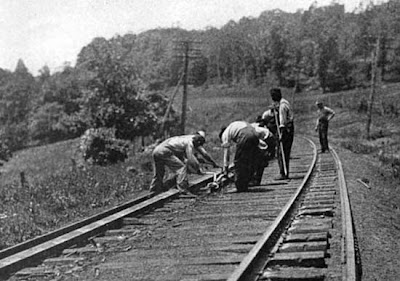 Photograph from Edward Hungerford's book, The Railroad Problem, published in Chicago by A. C. McClurg and Company, 1917, page 67; courtesy Wikipedia; in the public domain.
© Copyright 2011 – 2022 by Jacqi Stevens at 2:49:00 AM
Email ThisBlogThis!Share to TwitterShare to FacebookShare to Pinterest
Labels: Court Proceedings, Fort Wayne, Newspaper Clippings, Phillips, Reading Between the Lines