The Worth of a Life

How do you calculate the worth of a life?

Ever been party to those life insurance pitches—especially the ones from the "Good Old Days"? I have a friend who sold life insurance in the early 1970s. Here’s how he was trained to sell a man on buying life insurance for his wife:

That was one way to place a value on a life.

The year my daughter’s high school debate team took on the topic of medical malpractice, we found out that line of thinking—though examined in infinitely more detail—was applied in lawsuits for malpractice, too.

In contrast to the staggering amounts we see awarded in courts of law today, consider speculation in response to the perennial question that pops up in those philosophical discussions that wend their way far into the night. How much is a human body worth? Depending on who is answering—and how they frame the question—the value can be anything from a few dollars for the chemicals extracted from our makeup after we're gone, to twenty five dollars for those who see the question in a more entrepreneurial light. Framed differently, in light of the cost of living tissue, the value can be estimated upwards of forty five million dollars. And for my daughter’s high school friend who just received a life-sparing liver transplant? The donation of that one vital organ can only be considered as priceless.

So how did Mary Phillips determine how much she had suffered from the sudden loss of her husband’s life at the hands of negligent employers back in 1912? Surely, there were trial lawyers in town even then, eager to help her make an informed decision. After all, this one death was not an isolated incident. I’d presume a cry was arising across the land on behalf of many such widows deprived of their husband’s support in a time when it was not considered proper for a woman to work outside her home.

The fact that the Federal Employers’ Liability Act had been passed by Congress only a few years prior to Patrick Phillips’ death may have paved the way for Mary to take this bold step of pressing for redress. A growing number of work-related injuries and deaths in the railroad industry would no longer be egregiously considered the “human overhead of business.”

Though the law had a rough start—declared unconstitutional in its first form, then re-enacted by Congress—it spoke to an issue far too many had had to face in the name of “progress.” Here’s how Supreme Court Justice William Douglas characterized the legislation:

The Federal Employers Liability Act was designed to put on the railroad industry some of the costs of the legs, arms, eyes, and lives which it consumed in its operation. Not all these costs were imposed, for the Act did not make the employer an insurer. The liability which it imposed was the liability for negligence.

I wish there were a way for me to determine the steps in this particular decision-making process. Was Mary just out on a personal vendetta, seeking justice for a wrongful death?

I tend to see it more in terms of a blend of influences. As I’ll discuss tomorrow, I see signs of community support that may have encouraged Mary to not only stand up for herself, but for others in the same situation—and for those who potentially could be walking in her shoes, too. And I can’t rule out the possibility that some trial lawyers, eager to try the muscle of this relatively new law while simultaneously taking on the giants of the railroad industry, shopped the region for a potential “Jane Doe” to step up and provide that heartbreaking story to disrupt the march of “progress.”

So how did Mary Phillips arrive at the amount for which she was suing? The case opened with the amount set at $10,000. Did she calculate all the lost wages on her husband’s behalf, or put a dollar figure on the cost of living—while raising four daughters—for ten more years?

An amount the size of $10,000 from 1913—the year the suit was filed—would equal $238,095.24 in today’s dollars, according to an inflation calculator (found courtesy of fellow blogger Sheryl Lazarus’ recent post at A Hundred Years Ago).

Based on some of the medical malpractice lawsuits my daughter had researched a few years ago for her debate team, I thought that amount was somewhat conservative—not much more than many people take out in life insurance. For comparison, I took a look around online to find any current cases pending. One, from an incident a month ago, was seeking “more than” $50,000 for an employee hit by a Metra train in Chicago. That certainly was smaller (in today's dollars) than the amount equivalent to what Mary Phillips was seeking. And yet, it wasn’t anything like the phenomenal results some attorneys were bragging about for other recent cases—awards stretching into the multiple millions.

That, however, is now.

Then, Mary Phillips—really, her attorneys, for whom the courtroom was their stage and their platform for whatever ideological mission they may have pursued—was not at the crest of a wave, but at the beginning of a long, difficult process to turn around the way things had “always been” into a new type of “fair.”

As with anyone bargaining over a new position, she was likely to find the “ask” was not ultimately the “take.” 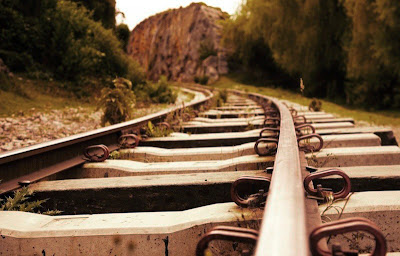 Photograph by Andres Rodriguez, Columbia; courtesy Wikipedia; released into the public domain by the photographer in 2009.
© Copyright 2011 – 2022 by Jacqi Stevens at 2:54:00 AM
Email ThisBlogThis!Share to TwitterShare to FacebookShare to Pinterest
Labels: Blog Recommendations, Court Proceedings, Fort Wayne, Phillips, Reading Between the Lines