As I go over this newly-found second batch of letters from Frank Stevens, serving in the Navy during World War II, the news begins to fill in the gaps in the first set of transcriptions already posted. For one thing, I take back every innuendo about the start of his tour of duty, training in the secluded paradise of St. Thomas in the Virgin Islands. It was apparently a good thing that Frank wasn’t sent back home to William and Agnes Tully Stevens in the Windy City that Christmas in 1942. He had a bona fide reason to be lolling on those white, sandy beaches. 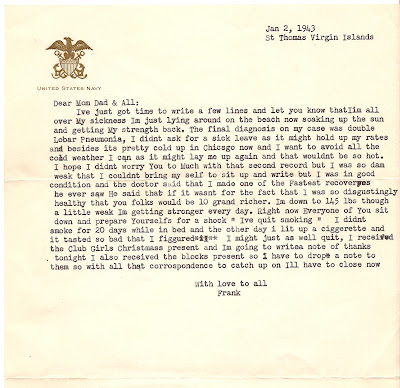 I’ve just got time to write a few lines and let you know that I’m all over My sickness I’m just lying around on the beach now soaking up the sun and getting My strength back. The final diagnosis on my case was double Lobar Pneumonia, I didn’t ask for a sick leave as it might hold up my rates and besides its pretty cold up in Chicago now and I want to avoid all the cold weather I can as it might lay me up again and that wouldn’t be so hot.
I hope I didn’t worry You to Much with that second record but I was so dam weak that I couldn’t bring my self to sit up and write but I was in good condition and the doctor said that I made one of the Fastest recoveries he ever saw. He said that if it wasn’t for the fact that I was so disgustingly healthy that you folks would be 10 grand richer. I’m down to 145 lbs though a little weak I’m getting stronger every day. Right now Everyone of You sit down and prepare Yourselfs for a shock “I’ve quit smoking.” I didn’t smoke for 20 days while in bed and the other day I lit up a ciggerette and it tasted so bad that I figgured I might just as well quit. I received the Club Girls Christmass present and I’m going to write a note of thanks tonight I also received the block’s present so I have to drop a note to them so with all that correspondence to catch up on I’ll have to close now.
With love to all
Frank 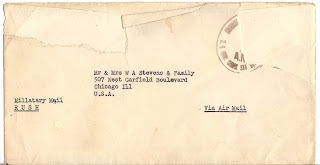