For the last two months, I’ve been working my way through the collection of letters sent during World War II by my father-in-law, Frank Stevens, to his parents, William and Agnes Tully Stevens in Chicago. After the letter dated October 26, 1945, I have no more letters from Frank prior to his arrival home—and not that many letters after that point, either. I did find some documents showing his intention to acquire further medical training while in the service, but no indication as to whether his application was approved or denied. It did, at least, indicate his intention to remain in the Navy.
But now I find a document showing his “date of separation” as December 21, 1945. That leaves a very slim margin, indeed, for his hoped-for arrival in Chicago in time for Christmas from his jumping off point at San Pedro, California. While a young man full of determination can sometimes work miracles, this doesn’t explain what has become of his career plans.
That date of separation leaves me quite perturbed. I, of course, know the rest of the story—at least the gist of what is yet to come. But I don’t know the details of the hows and whys. All I know at this point is that, despite evident hopes of further training in the field of aviation medicine, Frank Stevens now has a piece of paper filled with bureaucratic words like “separation” and “discharge.” 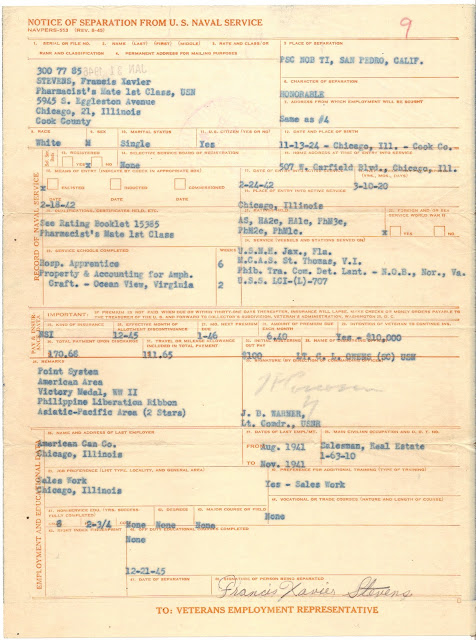