Home for the Holidays?

Almost exactly half a year before Christmas, 1945, Frank Stevens mentions in his letter to his folks that he sure would like to be home for the holidays. It’s been a rough three-and-a-half years in the Navy, especially in these last five months out in the South Pacific, and he’s ready to be relieved.
But that doesn’t seem to be what’s driving him to want to head home. More than anything, he is concerned about his father’s health. Perhaps somewhere deep within that unspoken internal region of hunches and premonitions, Frank is feeling that he might not make it back to Chicago in time. 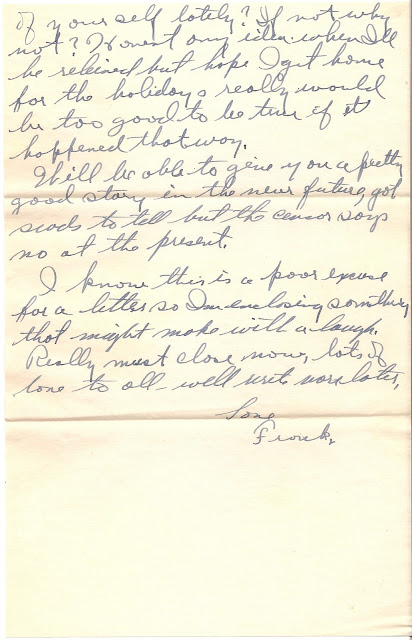 Say Dad have you been taking care of yourself lately? If not, why not? Haven’t any idea when I’ll be relieved but hope I get home for the holidays, really would be too good to be true if it happened that way.

Will be able to give you a pretty good story in the near future, got scads to tell but the censor says no at the present.
I know this is a poor excuse for a letter so I’m enclosing something that might make with a laugh.
Really must close now, lots of love to all—will write more later,
Love,
Frank 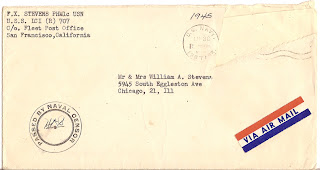 © Copyright 2011 – 2022 by Jacqi Stevens at 2:51:00 AM
Email ThisBlogThis!Share to TwitterShare to FacebookShare to Pinterest
Labels: Chicago, Family Letters, Stevens, Wars