Getting a Kick Out Of Tokyo Rose

I am wondering if there might have been some fatherly advice passing from William Stevens in Chicago to his twenty-year-old son Frank, so far away in the Navy—at least concerning the dangers of feminine wiles. Frank seems all too eager in this February, 1945, letter to his dad to press the point that he is still quite interested in playing the field—at least he’s not yet intending to settle down to any staid home life.

Better he take the advice of his far-away father than the advice close at hand each evening on the radio. Being part of the war effort in the Pacific, Frank Stevens is not immune to the ubiquitous broadcasts emanating from the propaganda machine in Japan. In Frank’s case, however, the official point of the broadcasts does not hit its intended mark. 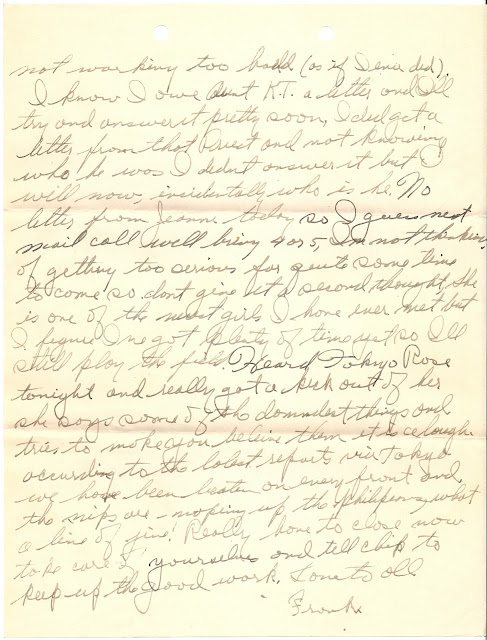 I know I owe Aunt K.T a letter and I’ll try and answer it pretty soon. I did get a letter from that Priest and not knowing who he was I didn’t answer it but I will now, incidentally who is he. No letter from Jeanne today so I guess next mail call will bring 4 or 5. I’m not thinking of getting too serious for quite some time to come so don’t give it a second thought. She is one of the nicest girls I have ever met but I figure I’ve got plenty of time yet so I’ll still play the field. Heard Tokyo Rose tonight and really got a kick out of her. She says some of the damndest things and tries to make you believe them it is a laugh. According to the latest reports via Tokyo we have been beaten on every front and the nips are mopping up the Philippines, what a line of jive! Really have to close now take care of yourselves and tell Chip to keep up the good work. Love to all.
Frank